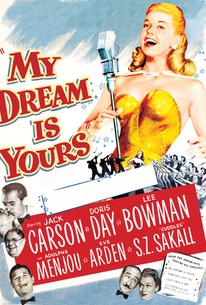 My Dream Is Yours Photos

My Dream Is Yours is a Technicolor remake of the jaunty 1934 Warner Bros. musical Twenty Million Sweethearts. But there's a significant difference here: whereas in the earlier film singing-waiter Dick Powell was turned into a crooning idol, in the remake it is Doris Day who is catapulted to stardom. Jack Carson (who was reportedly romantically involved with Day during filming) is the hot-shot promoter who makes a celebrity out of Day and lives to regret it, as does she, before the happy ending. The film's highlight is an animated dream sequence courtesy of Warners' cartoon division, directed by Friz Freleng and featuring cameos by Bugs Bunny and Tweety. Edgar Kennedy makes his final screen appearance in the role of Day's flustered uncle. The songs in My Dream Is Yours includes the big hit from Twenty Million Sweethearts, "I'll String Along With You."

Frankie Carle
as Himself

Ada Leonard
as Herself

Kenneth Britton
as Richards the Butler

Iris Adrian
as Peggy
View All

Critic Reviews for My Dream Is Yours

This is one of those Hollywood rarities, a film musical that offers topnotch entertainment. One of the big reasons is singer Doris Day. She's the most refreshing, completely captivating little minx you've ever seen in a long while.

Audience Reviews for My Dream Is Yours

Charming, breezy musical, Doris' second film, in some ways a retelling of her rise. Purportedly the basis for Alice Doesn't Live Here Anymore. Eve Arden is priceless as always as the faithful, glamorous sidekick.

My Dream Is Yours Quotes