My Entire High School Sinking Into the Sea2017

My Entire High School Sinking Into the Sea (2017) 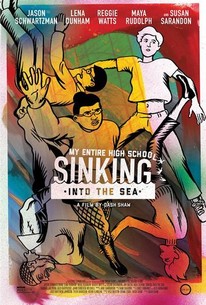 My Entire High School Sinking Into the Sea Videos

My Entire High School Sinking Into the Sea Photos

From acclaimed graphic novelist Dash Shaw (New School) comes an audacious debut that is equal parts disaster cinema, high school comedy and blockbuster satire, told through a dream-like mixed media animation style that incorporates drawings, paintings and collage. Dash (Jason Schwartzman) and his best friend Assaf (Reggie Watts) are preparing for another year at Tides High School muckraking on behalf of their widely-distributed but little-read school newspaper, edited by their friend Verti (Maya Rudolph). But just when a blossoming relationship between Assaf and Verti threatens to destroy the boys' friendship, Dash learns of the administration's cover-up that puts all the students in danger. As disaster erupts and the friends race to escape through the roof of the school, they are joined by a popular know-it-all (Lena Dunham) and a lunch lady (Susan Sarandon) who is much more than meets the eye. But even as the film piles on brilliant details like a post-apocalyptic cult formed by jocks, video game homages, and an infectious synth soundtrack, it never loses sight of the characters at the heart of the story. Hailed as "the most original animated film of the year" and "John Hughes for the Adult Swim generation" (Indiewire), the film's everyday concerns of friendships, cliques and young love remind us how the high school experience continues to shape who we become, even in the most unusual of circumstances.

News & Interviews for My Entire High School Sinking Into the Sea

View All My Entire High School Sinking Into the Sea News

Critic Reviews for My Entire High School Sinking Into the Sea

The animation set pieces scattered throughout the movie are frequently inspired, pulling in all manner of media and materials, and the backgrounds can be dazzling.

It's crazy and ridiculous at times. But I can't help agreeing with Assaf, who observes, of his companions' rescue plans, "I like it. It has the logic of a dream."

What's fun about My Entire High School Sinking into the Sea can't be separated from its swiftness and casualness: it never asks you to take it all that seriously. But it's got a fluky sensibility all its own.

Doesn't plumb the depths of adolescent emotions and high-school politics so much as skims the surface in a psychedelic dinghy.

Mostly - as that title deserves - it's a funny, imaginative trip down a high-school rabbit hole, in which we're reminded that catastrophic disasters may come and go but what matters in high school is where you fit on the school's social ranking.

It's not like anything that passes as animation these days, and that's perfect. High time some fresh air blew open those doors.

I feel that John Hughes would approve.

[W]hile it moves very fast and is frequently quite funny, it ultimately feels pointless. Still, it's the kind of film that begs to be seen on the big screen, granted you're into this sort of thing.

My Entire High School Sinking into the Sea is uniquely excellent because it relies heavily on a resource that few other animated features have: a powerful visual grammar that has been finely honed in the trenches of comics storytelling.

Succeeds through Shaw's unique visual style, but it rises to another level thanks to the impeccable vocal casting.

Audience Reviews for My Entire High School Sinking Into the Sea

Unaware of this being a first feature or debut for any matter. I found this film to be a hilarious self parody of high school life intersected with the plot to 'A Poseidon Adventure'. This unique film uses a very distinctive graphic novel inspired animation and look to it's characters and setting. it can be described as a sort of flash animation taking up an amateur comic design all to encompass this world of it's satirical message. Even while the animation is wonderful to look at and is fluid in most parts, the film is also surrealistic using the very unusual conventions to it's advantage to express moments of a suspenseful nature or subconscious behavior within the character's visual thought portrayal. Other than that the writing is excellent able to take what's cliche about high school life and turn it on it's head with a disaster plot that doesn't take itself too seriously at all, with plenty of laugh out load jokes. Lastly, I didn't think the film hit any high notes as being a huge recommendation on my part , though I really enjoyed it for what it is, an impressive and enjoyable debut animated feature.

My Entire High School Sinking Into the Sea Quotes