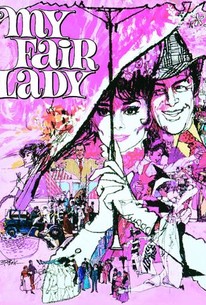 My Fair Lady is now more "lovelier" than ever with a breathtaking new restoration playing in cinemas nationwide for a limited time only. In honor of its 50th Anniversary, this eight time OSCAR winning musical has been restored frame-by-frame from the original 65mm negative and scanned utilizing start-of-the-art technology under the supervision of Robert Harris (the famed film historian).

Veronica Rothschild
as Queen of Transylvania

Henry Daniell
as Prince of Transylvania

Marjorie Bennett
as Cockney with Pipe

Baroness Rothschild
as Queen of Transylvania

Ben Wright
as Footman at Ball

Harvey B. Dunn
as Ascot Type

Sam Harris
as Guest at Ball

Jack Raine
as Extra
View All

News & Interviews for My Fair Lady

View All My Fair Lady News

Critic Reviews for My Fair Lady

Mr Alan Jay Lerner has done a brilliant screenplay from his own brilliant stage play.

One of those rare, rare occasions when everything goes right, when it keeps going right and it moves and takes the spectator along, enchanted and enthralled.

For those who've seen the stage show, My Fair Lady give complete satisfaction and those who will see and hear the musical for the first time will be enchanted by it.

In this literal, beautiful, bountiful version of the most gilt-edged attraction in theater history, Jack Warner has miraculously managed to turn gold into gold.

Despite all reservations expressed, I must make clear that his fantastically successful show has been converted into a generally entertaining film.

There are not enough superlatives for this new, 50th Anniversary digital transfer. As good as it gets for home video--and the reference disc so far for the 4K format. (4K Blu-ray Paramount 2021 blu-ray review).

I'll take it over fellow Best Picture winners Oliver! and Gigi any day of the week.

My Fair Lady is a classic tale of "boy meets girl" set to an iconic soundtrack.

Times having changed may influence how the film may be viewed by modern audiences, but the things which charmed countless people before will likely do so again.

It's Lerner and Loewe's music that is really at the heart of the production.

Mike Massie
Gone With The Twins
View All Critic Reviews (62)

Audience Reviews for My Fair Lady

Pygmalion is a great film but not as charming as this My Fair Lady, an adorable musical version of the same play with delightful songs and a splendid cast - but even so, Doolittle's change doesn't seem as gradual here, and the film ends with a rather vexing, sexist conclusion.

Henry Higgins bets that he can turn cockney Eliza Doolittle into a lady. The play on which this musical is based and the film are profoundly interesting. The conception of rhetoric and its relationship to identity are thoroughly explored. By changing Eliza's language does Higgins change who she is? Is that form of education robbing her of her independence and identity? Is that even what we mean by "education?" Should language be changed to fit societal norms? The film and play poses these questions and answers very few. Audrey Hepburn is delightful as always, and Rex Harrison is the perfect conceited intellectual. The love plot is charming and made me smile more than once. The only problem I had with the film's performances is Harrison's singing. He more spoke his words in rhythm than sang them, but after a while, this delivery grew on me. *Spoiler Alert* I wish the story ended differently. There wasn't enough humility on the part of the love-vanquished Professor Higgins, and the final shot of Eliza getting his slippers made me think that neither of these characters learned enough. Overall, this film is very good, a fine representation of its source material.

This is George Cukor's lavish, large budget musical adaptation of George Bernard Shaw's comedy Pygmalion, and the result is something actually quite spectacular. I've always looked at this stroy as being maybe a bit girly, but it's really not the case. It's a very entertaining, and actually quite hilarious (at times) look at class differences and finding one's place in life. Rex Harrison is Professor Henry Higgins, a wealthy, cultured, and highly educated lphoneticist who makes a bet with his colleague Colonel Pickering (Wilfrid Hyde-White) that he can take an uncouth cockney flower girl (Audrey Hepburn) and transform her into a duchess by the time the Embassy Ball comes around. It's a tale as old as time, but a quite endearing one nonetheless, especially since several more versions have been filmed since this one, namely Pretty Woman and She's All That. This particular telling of the story though is one that's quite special. It's rightly regarded as a classic, and one of the best musicals ever. I won't disagree. The music is great, as is the singing ,even though Harrison mostly talk-sings, and Hepburn got dubbed over by someone else. Now that's I've finally seen this version, I'm able to see yet another musical that has been quite influential on Seth MacFarlane, mostly with his show Family Guy. Not only did they make an episode that's a nonmusical remake of this film's presence, but Rex Harrison (his appearance, voice, and mannerisms) is one of the primary influences on the character of Stewie. The story evolves as you think it might, with there being lots of ups and downs, trials and tribulations, and some successes as well as missteps. For the longest time though, the film prrogresses in a rather realistic way by starting to end rather bittersweetly instead of a sappy romantic happy ending. However, shades of this latter ending do start to rear their head, but not enough so to make me totally angry or derail things. Also, while a lot of the music is good, it's not all great, so these reasons are mainly why I'm giving such an otherwise extremely great and well made film a half star less than perfect. Could the film be better? Sure. But not by much, As it stands, this is a very fun movie that's far more enjoyable and engaging than the premise might make it seem. The performances are iconic, the sets and costumes stunning, and the tunes are pretty memorable. Give this one a go. It definitely lives up to its reputation.

My Fair Lady is one of those musicals that try to not compare to the source material, but base on it's own terms. If I was to base on it's source material, I would be here for days talking about the ending of this film and why I feel that it was unnecessary. But seeing as how this is based on the film, let's move on. I never saw this classic film until I got news that I was going to be in my high school's production of the musical of the same name (similar with Fiddler On The Roof). When I first watch this film, I had no expectations and walked in clean minded. What I got was two hours and fifty minutes of a movie that I had seen so many parodies of that I was able to know exactly what was happening and when. Did this take away from the film's charm? No, but for a new generation of viewers, this basically means that they won't have the privilege of being shocked at the events of the film. The main thing that shocked me about this film is how beautiful and clean this looks. This film was made during a time when color was still relatively new and here it embraces the idea of making this colored in such a gorgeous way that you can't help but admire all that you see. Everything from the dirt poor streets to the magnificent set used for the Ascot Race is... stunning. Yeah, that is the best way to describe this film in terms of looks: magnificent. In a day where almost all films have computer graphics, this film reminds us why we love classic films all over again. I am still puzzled as to why Julie Andrews did not reprise her role in the film adaption, but in a way, I am kind of glad that Audrey Hepburn played the main female lead. Not only because it meant that Julie Andrews could now play in Mary Poppins, but also because Hepburn would later go on to make the film's main female cockney memorable with her use of the cockney voice. My only complaint is that she never does any of her own singing in this film. Sorry, but that is a distraction to me. I put up with it for as long as I can, but one can only take so much before you wish they allowed her to sing. Rex Harrison is wonderful as he embodies this role. As I said, I was in an adaption of My Fair Lady and as such, I had to go and watch other performances to understand how this, being the play, would work. One thing I noticed is that no one can preform Professor Higgins at all. Well, not nearly as good as Harrison. He made this role forever in one image and that is all that we need. Many have imitated his Oscar winning performance, but no one has been able to equal him. That takes me back to what I said earlier: this film is embedded in our pop culture. You don't have to see the film to know how things play out, but you do need to in order to see why this film is really remembered for what it is: a wonderful musical that not only charms people, but continues to delight people with it's off-key romance and songs that are beyond fun to sing to.