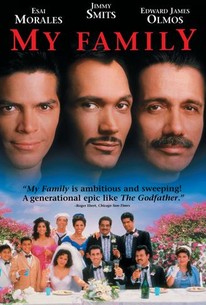 Critics Consensus: My Family's emotional impact is dulled by sentiment, but this well-acted drama strikes a universal chord with its multi-generational look at Mexican-American life.

Critics Consensus: My Family's emotional impact is dulled by sentiment, but this well-acted drama strikes a universal chord with its multi-generational look at Mexican-American life.

Critic Consensus: My Family's emotional impact is dulled by sentiment, but this well-acted drama strikes a universal chord with its multi-generational look at Mexican-American life.

Featuring Jennifer Lopez in her first major big-screen role, Gregory Nava's My Family traces three generations of the Sanchez's, a Mexican-American family living in East Los Angeles. Beginning in the 1930s, the film outlines the struggles faced by Jose (Jacob Vargas) and Maria (Lopez) as a recently immigrated married couple raising a family. As Jose and Maria age, the focus shifts to their son, Jimmy (Jimmy Smits), as he starts his own family in the 1960s. While Lopez' role was uncredited, she was nominated for an Independent Spirit Award for her performance. My Family has also been released under the titles My Family, Mi Familia, Cafe Con Leche, and East L.A. ~ Matthew Tobey, Rovi

Thomas Rosales Jr.
as The Boatman

David Salas
as Member of The Originals

Bill Mondragon
as Member of The Originals

Eric Mondragon
as Member of The Originals

Dennis Jimenez
as Member of The Originals

Alex Tanasi
as Member of The Originals

George Lopez Jr.
as Ballplayer No. 1

Moses Saldana
as Ballplayer No. 2

Angelina Estrada
as Woman with Groceries

Critic Reviews for My Family

There are moments in My Family that convey Nava's love for these characters. That warmth makes My Family impossible to dislike despite its flaws.

It is evocative well-crafted and performed with verve and passion by a first-rate cast of Latino actors.

The warmth of My Family's characters and humor, the lush-ness of its cinematography and local color, and the universality of its family and sibling conflicts, make for pleasurable company.

One of the most satisfying dramas I've ever seen.

The last segment is the best, so much so that one wishes Nava had left out the first two parts and concentrated on fleshing out the third section.

What makes movie characters come alive are differences, not similarities. My Family could be any family, and thus, is no family at all.

The film is sweet but never cloying. The continuity doesn't break because the actors - all excellent - convincingly resemble the others who played the same characters in the past. [Full review in Spanish]

This Hollywood effort at unspooling this seldom heard American story is long overdue.

Smits gives a wonderful performance in a film that also stars Esai Morales, Edward James Olmos and actors without household names but with equal talent.

Were this superb drama nothing more than a rich exploration of family, it would have been more than enough. But Nava and his cowriter, wife Anna Thomas, offer up layers and nuances.

In its efforts to illustrate various aspects of the Mexican-American experience, a sense of family is one of the film's principal casualties.

My Family/Mi Familia is a chronicle of Mexican-American life, but it's more than that. Its a universal portrait of family ties, a film to which everyone can relate.

Audience Reviews for My Family