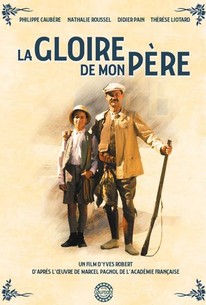 My Father's Glory (La Gloire de Mon Pere) is the first of French director Yves Robert's two films based on the memoirs of filmmaker/author Marcel Pagnol. In the early 1900s, young Marcel (Julien Ciamaca) makes regular trips with his family to their quaint farmhouse in the countryside surrounding Provence. One summer, Marcel's uncle (Didier Pain) comes along. Uncle's Catholicism immediately clashes with the agnoticism of Marcel's schoolteacher father (Philippe Caubere). During a pheasant hunt, the uncle hopes to prove his superiority over the father. So what happens? Take a glance at the film's title for a clue. My Father's Glory was followed up by the equally delightful My Mother's Castle (91).

My Father's Glory is the first in a series of two films that creep up on you with small moments of warmth and charm.

There are no featured audience reviews yet. Click the link below to see what others say about My Father's Glory (La Gloria de Mon Pere)!