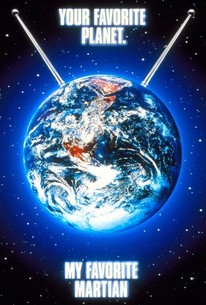 My Favorite Martian stars Jeff Daniels as Tim O'Hara, once a newspaper man and now a struggling television producer in Santa Barbara. Tim has a crush on vapid news reporter Brace Channing (Elizabeth Hurley) while overlooking his feelings for Lizzie (Daryl Hannah), a technician working at the station. Driving home one night, Tim wanders upon the crash landing of a spaceship from Mars. The Martian inside (Christopher Lloyd) has come to Earth searching for a fellow Martian who had been lost here 35 years ago. After the crash, he hides on the beach and shrinks his spaceship to the size of a toy to avoid detection; Tim finds the ship anyway, and takes it home. With little choice, the Martian, aided by his sentient and very neurotic spacesuit, follows Tim home and reveals himself. Tim sees the alien as his ticket to the big time, but the Martian, now masquerading as Tim's Uncle Martin (thanks to some Martian gum that transforms his appearance to that of a human) thwarts Tim at every turn. Just as he gets the video he needs for his story, O'Hara develops a friendship with his planetary neighbor and new "Uncle." The two suddenly find they are racing against the the clock -- a government team, led by a wacky scientist (Wallace Shawn), hunts Martin down, and the spaceship (a rental) is on a timed sequence to self-destruct if it cannot be repaired in time. Along the way, Tim loses his infatuation with Brace and finds his true feelings for the loyal Lizzie. Martin might also find his lost friend on Earth, just as he has found new ones.

Steve Bond
as Head of SETI

Jean-Luc Martin
as Guard at Gate

Christian Keiber
as Guard at Clearing

News & Interviews for My Favorite Martian

View All My Favorite Martian News

Critic Reviews for My Favorite Martian

Only the total collapse of Hollywood can save us from a reprise of My Mother the Car.

Walston displays a crisp wit and blithe sense of whimsy otherwise lacking in this loser.

What we have here is a highly agreeable cast goofing around within the familiar parameters of the alien-lost-on-Earth story, to absolutely no purpose except killing time.

This is entertainment of the lightest, most inconsequential sort.

There isn't enough nostalgia for the old series to recommend for any beyond the most juvenile mind-set.

An utterly pointless and unimaginative remake based on the classic '60s sitcom...a meteoric misfire

It's cheesy, creepy, and sleazy.

It's not a pretty sight.

It is a movie that contains laughs, but they are more of the embarrassing type than ones created by humorous situations.

This is filmmaking not for children, but for idiots of all ages.

Audience Reviews for My Favorite Martian

Here is an effort wherein you feel sympathy for the actors wading through the dreck but especially for Ray Walston, blessed (you would hope) to be in the movie of the popular television series he helped establish ... and this is what they give him. Where did I put the bottle of prescription painkillers and the bottle of tequila? Have you heard of this movie? There's a reason you haven't.

Thats right I saw it and you know what it sucked! Big suprise.