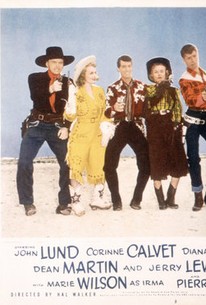 In 1949, Paramount put together a film version of the radio series My Friend Irma. It was assumed that the main attraction would be scatter-brained Irma, delightfully played by Marie Wilson. Instead, the picture was stolen by a couple of young upstarts named Dean Martin and Jerry Lewis. Accordingly, My Friend Irma Goes West concentrates almost exclusively on Martin and Lewis, with poor Marie Wilson virtually consigned to a supporting role in her own picture. The story begins when Irma and her friends head westward on the incorrect assumption that Steve Laird (Dean Martin) has landed a movie contract. During the train trip to California, Steve's goonish pal Seymour (Jerry Lewis) is entrusted with a pet monkey, owned by movie star Yvonne Yvonne (Corinne Calvet). There's a contretemps with gangsters and a kidnapping before a happy ending can be realized. Some critics found Jerry Lewis' moronic mugging to be tasteless; others were too busy laughing to be upset. Having proven their mettle with the two My Friend Irma flicks, Martin and Lewis were awarded with their own vehicle, At War With the Army.

Jimmie Dundee
as Deputy
View All

There are no critic reviews yet for My Friend Irma Goes West. Keep checking Rotten Tomatoes for updates!

There are no featured audience reviews yet. Click the link below to see what others say about My Friend Irma Goes West!