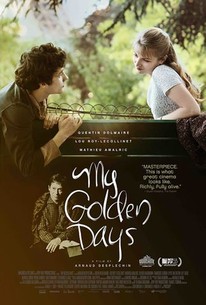 The story centers on Paul Dédalus, an anthropologist preparing to leave Tajikistan, who has a series of flashbacks that include his childhood in Roubaix, his mother's attacks of madness and his father's alienating depression. He remembers his trip to the USSR, where a clandestine mission led him to offer up his own identity for a young Russian, whom he considered a phantom twin for the remainder of his life as well as remembering Esther, the beautiful, rude love of his life.

Two beautifully modulated central performances and an accomplished sense of pacing are undone by the weary drone of familiarity in this lovelorn French melodrama from the writer-director Arnaud Desplechin.

Don't be put off by the subtitles - this is one of the great modern teen movies.

This quasi-autobiographical trilogy is further proof that AD is the Proust of modern French cinema.

Impeccably staged and played, this scattershot reflection on the follies, glories and regrets of youth pays affectionate tribute to a world of handwritten letters and payphones that has all but disappeared.

My Golden Days isn't perfect, but much like memories of our own youth, I'm not entirely certain it is meant to be, and as such the film becomes a far more emotionally powerful endeavor because of this.

Utterly believable and charming in its sincerity, Trois Souvenirs puts any bombastic films looking back at one's life to shame.

Glossy, and distractingly nostalgic, My Golden Days is Desplechin at his most pleasant and potentially least ambitious, but enjoyable nonetheless.

Though consistently amusing, the narrative direction and central themes of My Golden Days are too confused for it to serve as anything more than light entertainment.

The highs of infatuation and lows of betrayal are genuine and acutely felt by characters who are striving to discover themselves while being both profound and shallow simultaneously.

The details of the story aren't particularly compelling, but Desplechin's telling casts a spell that's curiously thrilling, as the film seems to be constantly reinventing itself as it goes.

There are no featured audience reviews yet. Click the link below to see what others say about My Golden Days (Trois Souvenirs De Ma Jeunesse)!