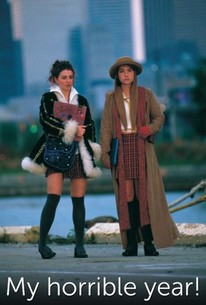 Actor Eric Stoltz made his directorial debut in this made-for-cable comedy/drama about a girl who becomes convinced her parents are going to announce their divorce on her 16th birthday, and her drastic efforts to put their relationship back on track. Allison Mack plays the distraught teenager, while Karen Allen and Brian Heighton portray her parents and Mimi Rogers and director Stoltz appear as her aunt and uncle. My Horrible Year debuted on the Showtime premium cable network on July 8, 2001.

Bret Hart
as Himself

Critic Reviews for My Horrible Year!

There are no critic reviews yet for My Horrible Year!. Keep checking Rotten Tomatoes for updates!

Audience Reviews for My Horrible Year!

Cute, but very little to it. Probably only of interest to pre teen girls and Allison Mack fans.