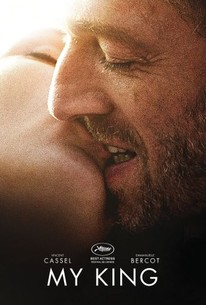 Critics Consensus: My King uses a medical catastrophe as the catalyst for a fully realized, thought-provoking look at love and co-dependency.

Critics Consensus: My King uses a medical catastrophe as the catalyst for a fully realized, thought-provoking look at love and co-dependency.

Critic Consensus: My King uses a medical catastrophe as the catalyst for a fully realized, thought-provoking look at love and co-dependency.

Tony is admitted to a rehabilitation center after a serious skiing accident. Dependent on the medical staff and pain relievers, she takes time to look back on a turbulent relationship that she experienced with Georgio. Why did they love each other? Who is this man that she loved so deeply? How did she allow herself to submit to this suffocating and destructive passion? For Tony, a difficult process of healing is in front of her, physical work which may finally set her free.

The meteoric Bercot brings to mind, variously, Isabelle Huppert, Michelle Williams, and Toni Collette. And Cassel has the greatest head in cinema next to that of Javier Bardem. But not even they can make this miserable marriage work.

Love is blind, but the audience isn't, and why these future contestants on The Jerry Springer Show stay together is anyone's guess, particularly Maïwenn's.

The central couple's ups and downs may grow tiresome, but the characters, powerfully realized by Emmanuelle Bercot and an especially riveting Vincent Cassel, never do.

"My King" brims with intimate details, adding to a sense of authenticity that is rarely found in films.

For some reason Maïwenn has decided to frame all this with a baldly metaphorical sequence in which the attorney, newly single again, wipes out in a skiing accident and mulls over the past as she learns to walk again at a posh rehabilitation center.

As a director, Maïwenn is at her best with ensembles, using actors as instruments and harmonizing tones.

Mon Roi is an effective film with a passion and a bundle of emotions that has the viewer thinking about their own emotions ...

There is nothing new under the sun and this is its most serious mistake. Maïwenn pretends that the film is deep and all she gets is a quite pathetic result. [Full Review in Spanish]

Actress-turned director Maïwenn ...gets fantastic performances out of her leads here, as characters try to survive a toxic chemistry that feels completely real.

Despite the familiar narrative elements, the complex and setback-rife relationship between the man and the woman in the movie gives it a depth that few similar French films possess.

Courtship, pregnancy, marriage, adultery: everything you want to know about life.

There are no weaknesses in this film; the writing and direction are of the highest level.

Bercot and Cassel give their best and shine with a fantastic chemistry in this superbly-directed film about the hardships of being so deeply in love and emotionally attached to someone who is irresistible yet so immature that he causes more pain and suffering than anything else.

The film's title is despicably anti-feminist, and should be instead what the husband calls himself at the beginning: Le Roi Des Cons. If you want to spend your precious hours, and your hard-earned money, remembering to add your income tax to that, by watching the idiocy, selfishness, suffering and cupidity of a set of bourgeois, who have the luxury of this cruel lifestyle, then this is the film for you. From the vacant wife, to the ostentatious depiction of the parent-child relationship, to the bastardry of the husband whom everyone must tolerate, there is little here that creates any sympathy for these people. Clothed in feminist appearances, this film is actually deeply conservative, and an unrelenting advertisement for the patriarchal, nuclear family. In case you thought the film would be serious drama, it also includes the obligatory product placement of French gastronomy, as well as plenty of stupid licentiousness for the voyeurs. It adopts the pseudo-shakespearean device, of trying to relieve the tedium of the marriage of the principal characters, by using for a bit of local flavour and a tokenistic nod to non-Parisian France, playful scenes with a group of happy, kind, generous, mixed race, working class and provincial boys, whom it then goes on to insult by implying that they are less intelligent than the disaster-prone wife. The film is an attempt to depict realistically a troubled marriage, but because it is more concerned with style and sensation than with substance, it is a poke in the eye to anyone who is actually in such a situation, particularly the trite ending. One star - this is in recognition of the pony that was abused and humiliated by the hideous clod of a husband, in the kind of scene that filmmakers should never demand, that animal handlers should not permit, and that actors should in any event refuse to play. This is a film only to be endured, and more than one in the audience simply got up and left early: the self-satisfied, banal face of French style.