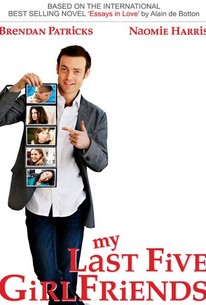 Based on the novel On Love by Alain de Botton, writer-director Julian Kemp's My Last Five Girlfriends traces the romantic journey of thirtysomething bachelor Duncan (Brendan Patricks. As the film opens, the despondent Duncan is apparently preparing to take his own life, but not before taking the time to send a message to the last five women he dated. Taking the form of a whirlwind tour through "Duncan World," the film is a comedic exploration of his failed relationships. First there's Wendy (Kelly Adams), who can't get over her ex. Then Duncan adapts a variety of different personalities in a failed effort to charm Olive (Jane March of The Lover). His relationship with Rhona (Cécile Cassel) ends badly because he can't appreciate her sense of style. Things go more smoothly with Natalie (Edith Bukovics), but he pulls back when he begins to feel that they're moving too fast. After their breakup, he pursues Natalie's friend Gemma (Naomie Harris of the Pirates of the Caribbean sequels). With Gemma, Duncan feels that he's learned from his past mistakes and found a potentially lasting and true love, but she seems reluctant to commit. My Last Five Girlfriends had its world premiere at the 2009 Tribeca Film Festival, where it was shown in the Discovery section. ~ Josh Ralske, Rovi

My Last Five Girlfriends is a stab at an anti- romantic comedy, but with too dull a blade.

It's hard to get a date when you won't stop talking about yourself even though you don't have much to say.

If the film is an intriguing attempt to do something different by way of a plot, it is not different enough to do more than pass the time.

Taking the central role of Duncan is Brendan Patricks, a pallid chap with pink watery eyes that make him look like a rabbit in the final stages of myxomatosis.

There are some nice insights, and it's got a higher IQ than most movies on this subject, but the irritation factor is still high.

Enough visual effect shots to rival a Transformers picture. And what does the screen blizzard amount to? An intolerable ride of self-importance and easily avoidable emotional trauma.

Director/writer Julian Kemp has totally embraced the notion that life is a merry-go-round and created a quick-paced, whimsical examination of the timeless quest for finding true love.

The attempts at being witty end up being more gimmick than skill, and produce stereotypical characters depicted by average performances.

Kemp engages the eye with a variety of camera tricks and animated inventions that belie his modest budget.

The miracle is not that this guy lost five girlfriends, but that he ever attracted them in the first place.

The basic idea of this movie was clever, and imaginative. I love quirky, and this was definitely quirky, but sometimes quirky isn't enough. I usually like quirky English movies, especially, but this one just seemed flat.