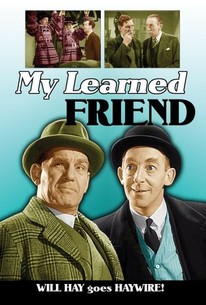 Will Hay, he of the pince-nez, outraged sniff, and overall demeanor of dignified incompetence, stars in (and codirects) another of his popular British comedies. In My Learned Friend, Hay is a seedy lawyer, one of several people targeted for death by a vengeful escaped convict. As the criminal's victims pile up, Hay can't help but feel a bit insecure. When he ends up the only survivor on the list, Hay begins to really worry. A slapstick climax on the clock-face of Big Ben caps this rapid-fire comedy of murders. Released in 1943, My Learned Friend was Will Hay's final film; he died of a lingering illness in 1949.

Will Hay
as William Fitch

Critic Reviews for My Learned Friend

Angus MacPhail and John Dighton have written a wealth of craziness into this screen play which emerges as a farce in the best and most violent tradition.

There are no featured reviews for My Learned Friend at this time.