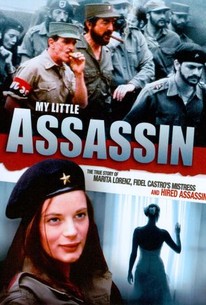 This made-for-TV drama was based on the true story of Marita Lorenz (Gabrielle Anwar), an idealistic American of Latin descent who, in 1959, became fascinated with Fidel Castro (Joe Mantegna), the revolutionary leader who had recently seized control of Cuba. Against the wishes of her mother Alice (Jill Clayburgh), who works with the CIA, Marita travels to Cuba in hopes of meeting the charismatic leader. Fidel is quite taken with her, and he immediately asks her to stay on as his translator and secretary. But it quickly becomes obvious that Fidel's greatest interest in Marita is not professional; they are soon having an affair, and she becomes pregnant with his child. Marita becomes disillusioned with Fidel, believing that power has led him to betray many of the principles he fought for, but she's shocked and confused when she becomes frighteningly dizzy and passes out, only to wake up in New York City several days later, without her baby. Alice tells Marita that she was rescued in a daring raid after Fidel's henchmen poisoned her and aborted her unborn child. Alice now tries to persuade Marita to return to Cuba -- not to help Fidel, but to assassinate him. Originally produced for the Lifetime cable network, My Little Assassin also stars Robert Davi, Ada Maris, and Scott Paulin. The real Marita Lorenz served as an advisor to the production.

Critic Reviews for My Little Assassin

Tries to portray Castro both as a monster and a swoon-worthy hunk--an impossible task if there ever was one.

There are no featured reviews for My Little Assassin at this time.