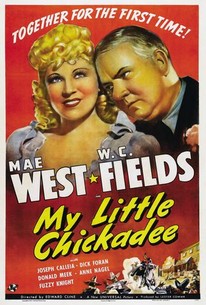 The once-in-a-lifetime teaming of Mae West and W.C. Fields in My Little Chickadee had the potential for comic greatness: what emerged, though generally entertaining, was, in the words of critic Andrew Sarris, "more funny strange than funny ha-ha." Mae West dominates the film's first reel as Flowerbelle Lee, a self-reliant woman who is abducted by a mysterious masked bandit during a stagecoach holdup. Because she refuses to tell anyone what happened during her nocturnal rendezvous with the bandit, Flowerbelle is invited to leave her prudish hometown and move to Greasewood City. En route by train, Flowerbelle makes the acquaintance of con-artist Cuthbert J. Twillie (W.C. Fields), who carries a suitcase full of what seems to be large-denomination monetary notes. After a lively clash with marauding Indians, Flowerbelle tricks Twillie into a phony marriage; she does this so that she can arrive in Greasewood City with a modicum of respectability, and incidentally to get her hands on Twillie's bankroll. Once she discovers that Twillie's "fortune" consists of nothing but phony oil-well coupons, Flowerbelle refuses to allow Twillie into the bridal chamber (he unwittingly crawls into the marriage bed with a goat, muttering "Darling, have you changed your perfume?") Through a fluke, the cowardly Twillie is appointed sheriff of Greasewood City by town boss Joseph Calleila. The plot is put on hold for two reels while La West does a "schoolroom" routine with a class full of markedly overage students, and while Fields performs a bartender bit wherein he explains how he once knocked down the notorious Chicago Mollie. Jealous over the attentions paid to his "wife" by Calleila and honest newspaper-editor Dick Foran, Twillie decides to gain entry into his wife's boudoir by posing as the still-at-large masked bandit. His ruse is soon discovered by Flowerbelle, but the townsfolk capture Twillie as he makes his escape. They are about to lynch the hapless Twillie when Flowerbelle discovers that Calleia is the genuine masked bandit. She urges Calleia to save Twillie's life by making a surprise appearance at the lynching and by returning the money he's stolen. When all plot lines are ironed out, Flowerbelle and Twillie bid goodbye to one another. Borrowing a device utilized by ZaSu Pitts and Hugh Herbert in 1939's The Lady's From Kentucky, W.C. Fields invites Mae West to "come up and see me sometime," whereupon West appropriates Fields' tagline and calls him "My Little Chickadee." The script for this uneven comedy western was credited to Mae West and W.C. Fields, though in fact West was responsible for most of it. Fields willingly conceded this, noting that West had captured his character better than any other writer he'd ever met. Despite this seeming gallantry, it was no secret that West and Fields disliked each other intensely, a fact that had an injurious effect on their scenes together. My Little Chickadee has assumed legendary status thanks to its stars, and it certainly does deliver the laughs when necessary: still, it is hardly the best-ever vehicle for either Fields or West, two uniquely individual performers who should never have been required to duke it out for the same spotlight. ~ Hal Erickson, Rovi

Gene Austin
as Himself

William B. Davidson
as Sheriff

Otto Hoffman
as Pete the Printer

George A. Billings
as Boy

Walter McGrail
as Townsman
View All

Critic Reviews for My Little Chickadee

the film remains incredibly entertaining, and one of West's most feminist and subversive films. Do yourself a favor and treat yourself!

The plot is sloppy, but the stars nevertheless shine.

It's really not a good movie, but it had something special about it that defied a rational critique.

One of THE classic W.C. Fields films; includes adversary Mae West, a plus.

Two greats blow it. Both have done far better.

Fields and West, two comic forces collide and both come out on town. A timeless treasure of comedy.

Neither Fields' nor West's best, but essential comedy all the same

Audience Reviews for My Little Chickadee

even i do like mae west but i didn't enjoy this movie. the reason i choose to review it now is because i feel like to vent!

The combination of W.C. Fields and Mae West winds up being not as good as it sounds. My Little Chickadee takes place in the old west. When Mae West falls for a "Zorro" type masked bandit, she's sent to live in another town to keep her honor intact (har har). On the train ride, she meets W.C., and mistakes his satchel full of whiskey coupons for a sack full of money and agrees to marry him in order to get that money. Meanwhile, W.C. is appointed sheriff of the town by the local bar owner (who sort of controls the town), as he thinks W.C. will make a good patsy. Add to this the local newspaper publisher, who's on a crusade to clean up the town and make it wholesome. Of course, all of the above men are in love with the aging West. And who could help themselves? She doesn't recite her lines so much as purr and growl them. West is all affectation and innuendo, and it's not particularly good innuendo. Her performance is very flat, to say the least, and as she was nearing 50 at the time (albiet a very attractive and young-looking 50), her schtick isn't very convincing . W.C. gives it his best, but the material just isn't up to his usual standard. It's a typical cowboy type picture with very little enthusiasm from the cast. I can't remember any of the gags, other than West limp-wristedly shooting indians out the train car window with deadeye accuracy. Pretty forgettable.

I?ll be honest, I was screwing around on the computer while I was ?watching? this, so I didn?t get a whole lot out of it. The film provides a fairly inspired on screen pairing of Mae West and W.C. Fields, two sort of old-timey vaudeville types both with a slightly raunchy (for the time) edge. The film?s western storyline is pretty stupid, it?s mainly an excuse for the two to engage in their trademark banter. This might actually be the first time I?ve actually watched a Mae West film, though I was pretty familiar with her shtick, which has permeated pop culture. I can?t say I was very impressed by her, her signature way of speaking got old as hell pretty quick. I was a lot more familiar with Fields, but he doesn?t really seem to be ?on? here. Overall this was a big piece of meh.