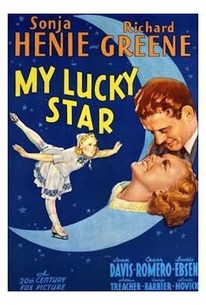 Sonja Henie is the "lucky star" in this enjoyable 20th Century-Fox musical. Henie plays Kristina Nelson a humble department store sales clerk who is spotted while skating by George Cabot Jr. (Cesar Romero_, son of the store's owner. George is so taken by Kristina that he gets her an athletic scholarship in a major university. It is hoped that our heroine will serve as a living advertisement for the store by strolling around in an expensive sports wardrobe; instead, she incurs the jealousy of her fellow students, causing a slump in sales. George also loses out romantically when Kristina falls in love with handsome teacher Larry Taylor (Richard Greene). Expelled from college, Kristina recovers from the blow when she's hired by a popular ice capades-style extavaganza. The film's highlight is Sonja Henie's "Alice in Wonderland" ice ballet, originally released in Sepiatone. Those not interesting in skating will be compensated by the lunatic comedy of supporting actress Joan Davis.

Brewster Twins
as June and Jean

Critic Reviews for My Lucky Star

There's nothing particularly new about My Lucky Star, but since Sonja Henie's skating still provides one of the major pleasures of the screen, what does it matter?

Audience Reviews for My Lucky Star

Unbelievable but inoffensive nonsense. Sonja Henie was never much of an actress but she's personable and skates well of course and Richard Greene is extremely good looking if bland. The real attraction of this is the supporting cast. Joan Davis is funny as Sonja's roommate, Buddy Ebsen goofy as her beau and a rare chance to see Gypsy Rose Lee, billed as Louise Hovick, on screen.