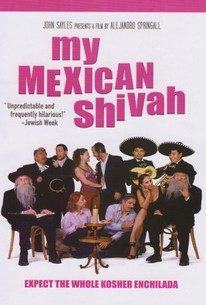 The passing of a Mexican Jew whose appetite for life was stronger than his spiritual discipline makes for a difficult set of funeral arrangements in this comedy from filmmaker Alejandro Springall. Moishe (Sergio Klainer) was a happy-go-lucky guy living in Mexico City's Jewish quarter until the day he died -- appropriately enough while dancing at a party for a local Hebrew theater troupe. While Moishe was a man with plenty of friends, most of the folks he left behind to arrange his funeral don't have much good to say for him. Moishe's daughter, Esther (Raquel Pankowsky), has long been bitter about the fact that he cheated on her mother, and with a Gentile to boot. His son, Ricardo (David Ostrosky), didn't much care for his dad, and at the moment is more concerned about the unexpected pregnancy of his short-term girlfriend. Moishe's grandson, Nicolas (Emilio Savinni), was forced to flee Mexico after being convicted on drug charges; having returned home, he's become a reactionary Orthodox Jew with nothing good to say about Moishe's lifestyle. The local rabbi (Lenny Zundel) has his own ideas about how to conduct the funeral and mourning period, which don't agree with Moishe's view of the world. And Galia (Sharon Zundel) is too busy dealing with her new passion for her cousin Nicholas to focus on her grandfather's passing. Morirse Esta en Hebreo (aka My Mexican Shivah received its North American premiere at the 2006 New York Jewish Film Festival.

My Mexican Shivah kvetches its way through an insipid vision of cross-cultural conflict.

Being neither Mexican nor Jewish, I imagine I'm the perfect audience for the chaotically cross-cultural ethnography farce of My Mexican Shivah.

Despite wacky klezmer music on the soundtrack, nothing terribly amusing or unpredictable happens.

Who needs subtitles when you can speak the universal language of stereotypes?

Repurposing clichés as springboards to deeper issues...[director Springall] reminds us that ritual can ease reconciliation, and that sometimes even meat and dairy can get along.

Alejandro Springall's My Mexican Shivah is another of the recent examples of the Jewish Diaspora absorbed in the preservation of its identity and its rituals in countries around the world.

An altogether charming study of a dysfunctional (what else!) Jewish family in Mexico City.

It was a nice try, but they didn't quite pull it off. The actors were all terrible, and the script wasn't very good. Occasional laughs, good direction and cinematography save this film from being a total mess.