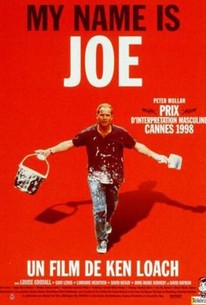 Actor Peter Mullan won the 1998 Cannes Film Festival "Best Actor" award with this film, directed by Ken Loach (Carla's Song, Ladybird, Ladybird). The drama is set in Possilpark, one of Glasgow's poorest neighborhoods, a rough section where half the population is out of work. Unemployed reformed alcoholic Joe Kavanagh (Mullan) does odd jobs and manages a stumbling soccer team. One of the players is Liam (David McKay), in debt to hood McGowan (David Hayman). Liam and junkie Sabine (Annemarie Kennedy) are raising a small son. After Joe meets social worker Sarah (Louise Goodall), he and his pal Shanks show up to help in the wallpapering of Sarah's apartment. This job creates a problem for Joe with the local unemployment office, until Sarah steps in to cover. It's the beginning of a romance, and Joe and Sarah make an effort to help Liam and Sarah when they are threatened by the loan sharks. Mullan commented, "The drug problem in that place is so serious that people are passive. They are corralled in a sort of dog-eat-dog environment where humans meet to laugh and thrive but have no hope of getting out." Scripted by former lawyer Paul Laverty, the film is inspired by the first half of Loach's Carla's Song. ~ Bhob Stewart, Rovi

Scott Hannah
as Scott (as a baby)

Rutherglen and The Wynnes
as Workers
View All

Often with a film like this you think you know how it has to end. The ending of My Name Is Joe left me stunned. I've rarely seen a film where the conclusion is so unexpected, and yet, in its own way, so logical, and so inevitable.

Loach in fine form, at the peak of his craft. Proletarian realism does not get better than this.

Ken Loach at his best.

Portrays the invisible class barriers and ways of seeing the world that can hobble the future of hopeful lovers.

It was a good idea having subtitles, because the heavy Scottish accents are very difficult to understand.

Mullan has a combination of good looks, virility, and sensitivity all at once - a terrific package.

Plays well as both a romance and a portrait of a lonely man coming to terms with the mistakes in his life.

Not bad. Not bad. A bit of a dip for Loach but there is enough to sustain your interest here.