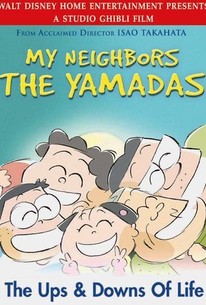 Based on a wildly popular Japanese comic strip, master animator Isao Takahata directs this loosely structured work about that wacky household, the Yamadas. The family consists of laid-back, rice cracker-addicted mother Matsuko; the bland businessman father Takashi, who has illusions of machismo; the fearless, acid-tongued grandmother Shige; the slacker teenaged son Noboru; the younger sister Nonoko, who has a freakishly voracious appetite; and Pochi, the misanthropic family dog. During the film, the Yamadas wrestle for control of the TV remote and they deal with a band of bikers who have invaded the neighborhood, while Takashi has fantasies about being born into a more interesting family. The film's score is done by popular songster Akiko Yano. ~ Jonathan Crow, Rovi

Critic Reviews for My Neighbors the Yamadas

It's definitely a really enjoyable little weird kind of entry from Studio Ghibli.

A deceptively slight film, imbuing into its simplistic animation style and sly humor an astounding level of philosophy

There's a crabby, gleeful spirit to the whole thing, carried along by animated bursts of imagination, snippets of haiku, and spirited song. Amid all the disgruntlement and dismay, there's a sweet we're-all-in-this-life-togetherness.

For all that they are cartoons, the Yamadas never court buffoonery... In fact, it's surprisingly observational, based in the way that people honestly act and feel.

...the movie would be best served by a viewing in separate installments.

Fluffy as a French pastry and almost as cloyingly sweet.

Unlike all other animated works from the celebrated Studio [Ghibli]

Audience Reviews for My Neighbors the Yamadas

If the world-renowned Hayao Miyazaki could be seen as the Walt Disney of the Studio Ghibli cannon, then the equally talented Isao Takahata can be viewed as the mad scientist. As much as I love Miyazaki's wonderful fantasy-adventures, I always appreciated Takahata bravery in experimenting with the capabilities of the animated medium. Although not all of his films are great ('Grave of the Fireflies' is a powerful anti-war film, 'Only Yesterday' is a very underrated slice-of-life flick, and 'Pom Poko' was an admirable but very flawed effort), Takahata's films always make themselves immediately distinguishable from other films in the Studio Ghibli cannon. Based on the popular Japanese comic strip, 'My Neighbor the Yamadas' is an anime family comedy that has a very unusual look from the usual Ghibli entries. Instead of the traditional anime style, the animation is a watercolor comic strip style drawn completely from digital technology (making this the first Ghibli film to be painted completely from computers). Not only does the animation give this a different feel, but the film also does not adhere to a traditional plot structure. Instead, it is a series of vignettes that account the daily lives of the Yamada family. Such sketches cover issues such as losing a child in a mall, the relationship between father and son, the wisdom of age, and getting one's first girlfriend. The film's biggest strength is in painting a very believable picture of family life that crosses cultural borders and is accompanied by a suitable amount of charming humor. The overarching theme of the film is that despite their flaws, the family still loves each other and the parent's only posses a desire for what is best for their children. The lack of overarching plot will certainly make this an acquired taste for even the most devoted Studio Ghibli fanatics (certainly not recommended for newcomers to the Ghibli catalogue), but 'My Neighbor the Yamadas' is a unique and touchingly honest picture of family life.

A chronicle of the Yamada Japanese family, My Neighbors The Yamadas is a coarse, but creative animation output from Studio Ghibli that fragmentary narrates the comical encounters of the members of the Yamada family. A satire of the relevant in marriage, family, and contemporary domestic affairs, My Neighbors The Yamadas remarks a contemplation on the quality of relationships within a family. Raucously lively.

This reminds me of the "funny pages" from the newspaper, 3 comic panels which are suppose to elicit laughter, but in fact leaves you thinking, 'who the fuck thinks this is funny?'. That is exactly what this film was like a much of short panels that I assume were suppose to elicit some laughter, I don't know if it was a cultural or if it just wasn't interesting enough, but I only had twenty minutes left until the end of the film and I just turned it off. I just didn't care. Plus in the beginning it felt really preachy and "quote-y". blah.....

Isao Takahata's "My Neighbors the Yamadas" is the complete opposite of his well-known masterpiece "Grave of the Fireflies". It dealt with common family trials and presenting it to us audiences with humorously light-hearted touch. And while "Grave of the Fireflies" used stark, and realistic animation, "Yamadas" used a more unconventional, surreal style, to accompany the comic nature of the film. The opening sequence used unique objects to allegorically represent common family situations. Many said that this is not on par with "Grave", but for me, it is also great on its own.

My Neighbors the Yamadas Quotes