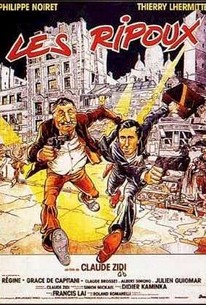 This run-of-the-mill police comedy drama focuses on two policemen, René (Philippe Noiret), a somewhat grubby plainclothes policeman who has lived on bribes and minor racketeering for the last 20 years, and his new partner François (Thierry Lhermitte), especially honest and certainly naive. René is too accustomed to the good life with his lover, a former prostitute, and too much addicted to the racetrack to give it all up because of a straight-arrow partner. And so he fixes François up with the gorgeous Natasha (Grace de Capitani), herself a high-class prostitute whose charms leave the young cop besotted and whose expensive tastes leave him broke. Driven by love above all other concerns, François not only joins René in his schemes, he eventually gets an idea for swiping enough money to retire them both for life. Both Noiret and Lhermitte give top-notch performances that help to compensate for the otherwise predictable script. Ripoux was awarded 1984 Cesars for "Best Film" and "Best Director." ~ Eleanor Mannikka, Rovi

Michael Morris
as Fisher
View All

There are no critic reviews yet for Les Ripoux (Le Cop) (My New Partner). Keep checking Rotten Tomatoes for updates!

There are no featured audience reviews yet. Click the link below to see what others say about Les Ripoux (Le Cop) (My New Partner)!