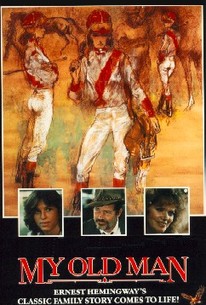 My Old Man was adapted from Ernest Hemingway's short story of the same name by Jerome Kass. Hemingway's story told of a down-on-his-luck horse trainer who is given a second chance at making something of his life by his son. This made-for-TV version changed the son to a daughter, played by Kristy McNichol; the "old man" was portrayed by Warren Oates. Eileen Brennan also stars as a waitress who acts as surrogate mother for McNichol--and who'd like to act as wife to Oates. Filmed at Saratoga Springs, New York, My Old Man premiered on December 7, 1979. An earlier, less sentimental theatrical-feature version of the same Hemingway tale was filmed in 1950 as Under My Skin, with John Garfield in the lead.

Frank Hamilton
as The Preacher

Nick D'Elia
as Gambler
View All

Critic Reviews for My Old Man

There are no critic reviews yet for My Old Man. Keep checking Rotten Tomatoes for updates!

There are no featured reviews for My Old Man at this time.