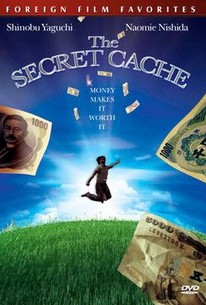 An obsessed young woman sets out to find a suitcase stuffed with 500 million yen in director Shinobu Yaguchi's satirical tale of one girl's singular quest for monetary satisfaction. Kidnapped by bank robbers who had just pulled in a tidy sum from their latest heist, material girl Sakiko (Naomi Nishida) is the sole survivor of a violent car wreck that instantly kills all of the bandits and sends the suitcase containing the money flying into a nearby grotto. Despite the commonly held belief that the cash went up in flames with the getaway car, Sakiko knows better and quickly becomes single-minded in her determination to seek out the missing take.

Critic Reviews for My Secret Cache

There are no critic reviews yet for My Secret Cache. Keep checking Rotten Tomatoes for updates!

Audience Reviews for My Secret Cache

There are no featured audience reviews yet. Click the link below to see what others say about My Secret Cache!