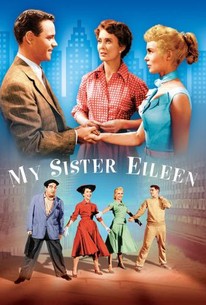 This musical version of the Broadway play was co-written and directed by Richard Quine, who co-starred in an earlier 1942 version. It stars Janet Leigh and Betty Garrett as sisters Eileen and Ruth Sherwood, small-town girls who go to Manhattan in search of thrills and move into a Greenwich Village apartment complex populated by eccentrics.

Critic Reviews for My Sister Eileen

Janet Leigh makes an unaffected Eileen, but Jack Lemmon can find little to do with his improbable role of confidence restorer to a loveless lady writer.

A few clicks in another direction and this movie is a feminist social issue drama. Still, the acting, singing, dancing and technical presentation of all of the above are spot on and delightful.

Audience Reviews for My Sister Eileen

A lightweight musical w/o much of a plot (2 small town women try to make it in New Yawk) but still interesting for a coupla reasons. One is the performance of Mr. Bob Fosse. He does sincere engagingly well. Then there's a song by Lemmon at which he fails, but he goes down gallantly fighting. And there's Janet Leigh trying the musical/dance genre. Whoda thunk it? These and more make this interesting while still not altogether entertaining.

I know it's a remake, but it's got Jack Lemmon, and he's really funny in this movie. I want to see the original now.

Bland average musical, Betty Garrett is good as is Jack although he shouldn't have sung. Some of the dances are fine some blah. Worth a view but only one.