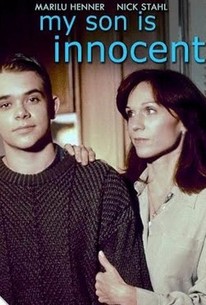 My Son Is Innocent Photos

The life of teenager Eric Sutter (Nick Stahl) is forever changed for the worse when he is arrested for attacking a neighbor woman with a knife--the case being "sealed" when the victim positively I.D.s the hapless Eric, who has harbored a crush on the woman for months. Anxious for a conviction, the police use only the evidence that will bolster their case in prosecuting Eric, while the media has a field day stirring up public resentment against the boy. Too, Eric's surly, rebellious attitude seems calculated to tighten the noose around his neck. Only Eric's mother Margaret (Marilu Henner)and her loyal boyfriend David (Matt McCoy) believe in the boy's innocence, and together they tirelessly fight for justice against all odds. Originally broadcast by ABC, the fact-based My Son is Innocent first aired May 6, 1996. ~ Hal Erickson, Rovi

Critic Reviews for My Son Is Innocent

There are no critic reviews yet for My Son Is Innocent. Keep checking Rotten Tomatoes for updates!

There are no featured reviews for My Son Is Innocent at this time.

My Son Is Innocent Quotes