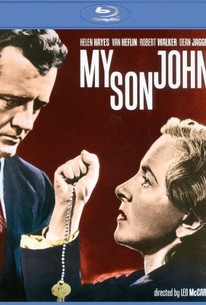 Filled with the kind of Red Scare propaganda that must have delighted members of McCarthy's House Un-American Activities Committee, this drama chronicles the attempts of two All-American parents to save their son from the temptations of Communism. Unfortunately, they are too late. The arrogant and intellectual young man, a worker in a federal agency, returns home from a long absence spouting pro-Ruskie doctrine and deriding the beliefs of capitalism and US at every opportunity. Enraged at his son's mocking ways, he beans him with the family bible. Things get worse when an FBI agent shows up to tell the horrified parents that their son is an enemy spy. The mother blows a gasket and flies to Washington, DC where her son works to make him swear on the same book that the FBI agent is wrong. The son does so, but its a lie. The mother soon finds this out. She also learns that her treacherous son's girlfriend is a Commie. What's a mother to do? Fortunately, before it is too late, her son realizes the error of his ways and tries to double-cross his Pinko superiors. Unfortunately, it is too late and they shoot him and just before he gaspingly dies upon the steps of the Lincoln Memorial, he tapes his final confession and gives American youth everywhere a potent message about honor. The star of the film, Walker, best remembered for his gripping portrayal of a psychopath in Hitchcock's Strangers on a Train, died before production finished and so scenes from that film were spliced into My Son, John.

Van Heflin
as Stedman of the FBI

Critic Reviews for My Son John

Its intentions are of the highest calibre; unfortunately the entertainment qualities are not.

My Son John proves once again that Hollywood believes the only way to tackle a "problem" film is to belabor a point even at the sacrifice of realism.

It is done with such earnestness as to be slow-moving, but the actors are masters of intricate timing and intonation and have the easy spontaneity and control to put across a story that is mostly talk in parlor, bedroom, and bath.

... the implications of the story may prove distasteful to many a ticket - buyer who thoroughly detests the horrors of a police state.

The movie is swathed in very thoughtful shades of gray almost throughout.

Leo McCarey (better known for his screwball comedies) has made an agit-prop, an overtly political film that reflects the fear and paranoia generated by McCarthy in the 1950s.

Robin Wood has written about how McCarey loves romantic couples but seems to loathe families, and this point is borne out most harrowingly in My Son John, the skeleton film in his closet, and one of the most personally revealing.

Audience Reviews for My Son John

Somewhat paranoic drama looking at the perceived communist threat in the 40's and 50's. Overwrought in both direction and performance-Helen Hayes in particular seems on the very verge throughtout the film. Walker died suddenly during the making of the film and his performance was completed by cobbling together outtakes from Strangers on a Train and the use of a stand-in in some scenes, it's easy to pick out most of the those where this was done and it cast an odd pall over the picture. A strange experience.