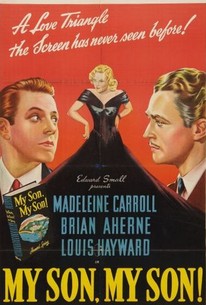 My Son, My Son Photos

Adapted from the novel by Howard Spring, My Son My Son stars Brian Aherne as a self-made success determined to give his son the lavish upbringing he himself was denied. Not surprisingly, the son (Louis Hayward) grows up spoiled rotten, causing grief and pain to everyone who loves him. The limit comes when the boy tries to steal his father's lady friend (Madeline Carroll). When World War I breaks out, the son displays the noble streak that he has hidden so long by dying a hero's death. Its uplifting ending at odds with the darker denouement of the original novel, My Son My Son is high-class soap opera made workable by the multilevelled performances of Brian Aherne and Louis Hayward.

Scotty Beckett
as Oliver as a Child

Brenda Henderson
as Maeve as a Child

Teddy Moorwood
as Rory as a Child

May Beatty
as Annie

Stanley Logan
as The Colonel

Critic Reviews for My Son, My Son

This two generation melodrama, about a self-sacrificing father and no-good son who needs to redeem himself, is well acted by Brian Aherne.

There are no featured reviews for My Son, My Son at this time.

My Son, My Son Quotes