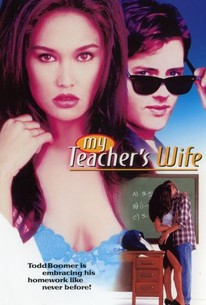 Jason London stars in this teen wish fulfillment romantic comedy, playing Todd Boomer, a would-be cartoonist who needs a recommendation to Harvard from his smarmy math teacher (Christopher MacDonald). However, calculus is the one subject in which Todd isn't pulling his weight. One rainy night he picks up a woman stranded by the side of the road who needs a ride (Tia Carrere). The woman turns out to be a whiz in his rusty subject, and she begins tutoring him. Only later does he start to fall for her -- and only later does he realize she's the wife of his math teacher. Although they begin a tentative affair, both are constantly worried about being discovered, which could ruin each in different ways. Meanwhile, Todd runs afoul of his own doting girlfriend, Kirsten (Alexondra Lee), as well as his best friend Paul (Zak Orth), who has a crush on Kirsten. The happy trio is splintered by Todd's romantic dalliances. My Teacher's Wife uses Todd's drawings, actually inked by cartoonist Bill Plympton, as loose narration.

Caroline Crumpler
as Girl in Class

There are no critic reviews yet for My Teacher's Wife (Learning Curves). Keep checking Rotten Tomatoes for updates!

The main character is a budding cartoonist and it is an interesting concept to break up the plot with animated segments of his cartoon alter ego, a wolf. The supporting cast is pretty good. It's not that bad overall. It's better than many coming of age type movies where the young man is trying to lose his virginity. At least he has more feelings and deeper relationships with the characters surrounding him rather than a one track mind on sex.