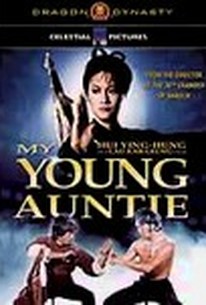 In a change from the usual action film, this story starts with the marriage of a young, uptight female martial-arts champion, Cheng Tai-nun (Hui Ying-hung) to an elderly and very wealthy landowner. The marriage is in name only, and takes place at the wishes of the old man expressly to keep his estate from falling into the greedy and unscrupulous hands of his brother. Tai-nun inherits his estate when he dies, and is soon in Canton, staying with her older nephew by marriage, Yu Cheng-chuan (Liu Chia-liang), and his young and attractive son Yu Tao (Hsia Hou). When the traditional and conservative Tai-nun, a woman from the provinces, runs into the modern and Westernized Yu Tao for the first time, the sparks fly and the comedy of cultural clashes begins. As the relationship between the two young protagonists of the old versus the new takes its own jaunty course, the evil brother steals the deed to the dead husband's estate, and the action begins. Tai-nun gets to showcase her martial-arts talents, as her views of the world slowly begin to change. ~ Eleanor Mannikka, Rovi

An unalloyed triumph of kung fu comedy. Kara Hui is a marvel to watch in action as she's known as the best Hong Kong heroine of early 1980s and she is also underrated in terms of beauty. I see what actor-director-writer Chia Liang Liu has done with this film is really a pleasant surprise: he has taken a martial-arts plot and re-constructed it along the lines of a Hollywood-style musical! Complete with episodes of singing and dancing! It was around the time of the making of this film that some film-makers and film fans began to recognize that the cinematic performance of martial-arts (really derived from the acrobatics of the Chinese opera) has more in common with dance than with fighting. The result is an incredibly charming entertainment, filled with marvelously human characters attempting miraculous kung fu.