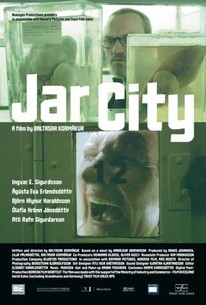 In 1974, a young Icelandic girl met a grim fate at the hands of a murderer -- and the crime was never solved. So begins celebrated director Baltasar Kormákur's procedural thriller Jar City (or Mýrin), adapted from Icelandic writer Arnaldur Indridason's 2000 best-seller, Tainted Blood. In the present day, the jaded and exhausted detective Erlendur (Ingvar E. Sigurdsson) begins to investigate a link between that notorious unsolved crime and the homicide of a local thug, Holberg (Thorsteinn Gunnarsson). Erlendur also struggles in his private life with an overwhelming problem: the drug addiction of his own pregnant daughter, Eva Lind (Agusta Eva Erlendsdottir). Meanwhile, Örn (Atli Rafn Sigurdarson), an employee at a DNA-mapping lab, reels from the death of his own daughter, who suffered from a brain tumor. In time, the two men's lives will intersect in a myriad of ways that neither can even begin to foresee -- and the motivation for Holberg's original crime will become resoundingly clear. ~ Nathan Southern, Rovi

Kormákur, who made the highly original 101 Reykjavik, is clearly saying something pessimistic about his homeland and, as a film-maker, has the means to do so to some effect.

A disturbing, bleak, multilayered mystery that will not just worm under your flesh but also wriggle inside your nightmares.

The burden of this Icelandic procedural thriller will put a chill in your bones, if the lugubrious, wind-whipped coastal setting hasn't done already.

The disinterring of corpses makes this film almost too ghoulish for its own good, but Iceland's top director Baltasar Kormákur wraps it up in his distinctive frostbitten style.

It's an intriguing puzzle that held me gripped until the very end.

It's a terrific piece of direction from Kormákur. Everything, from the look of the film, to the brilliantly unsettling use of food as a recurring motif, is judged perfectly.

A well-crafted police procedural written and directed by the Icelandic director Baltasar Kormakur.

Unnerving and emotional, this police thriller has an unnerving breadth and depth, as a murder case opens a decades-old inquiry that brings all kinds of dark creepiness with it. It's like an Icelandic twist on Seven.

I'll admit that I struggled to keep up with some of the more intricate twists and turns, but things come together for a shocking and memorable finale.

Refusing to spoonfeed its audience, this is a dark, convoluted thriller, tightly scripted and richly atmospheric.

Bleak surroundings and grim humour create a suitably sombre mood, but in the wake of juicy police procedurals like Dennis Lehane adaptations Mystic River and Gone Baby Gone, this is disappointingly straightforward stuff.

In short, this is a superbly made, thoroughly engaging thriller that exerts a powerful emotional grip and is well worth seeking out. Recommended

.Awesome Icelandic film, with English subtitles. About a murder case that opens past cases and the disappearances of others. Over all a good thriller. Enjoyed seeing the many different parts of Iceland I remember from living there for 3 years. Story line and film worth 5 stars.

An intense thriller that scores low on acting of one of the significant characters, and suffers a bit due to it. Otherwise, it's a well-packed product worth a watch.

Icelandic murder mystery that would be a fairly standard story of the reopening of an old unresolved small-town case if it were not for the modern-day genetics database twist. An interesting movie that ties up all the plot strands within a nice length.