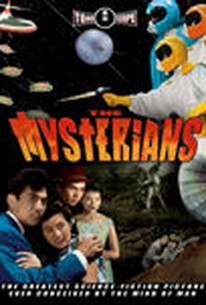 Most famous for his original Godzilla film in 1956, director Inoshiro Honda is primarily a screenwriter and quite seldom a director. One of his recurrent themes -- the deadly or mutant effects of atomic radiation (as in Godzilla), is also featured in this otherwise routine sci-fi film. The title characters are from a planet that has been destroyed by nuclear bombs. After the Mysterians land on Earth they ask the Japanese for some land to settle and a few nubile women to propagate their race. Scientists are dubious about the intentions of these aliens and so an offensive is launched against them, an offensive that looks like it has no hope of success. Special effects here are excellent considering that computer-generated effects were far in the future. The large robot may be the one exception. ~ Eleanor Mannikka, Rovi

It looked good when I was 12. Now it totally bores.

Perhaps the most intriguing of all Toho sci-fi films.

There are no featured audience reviews yet. Click the link below to see what others say about Mysterians!