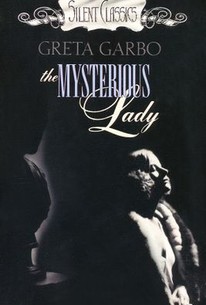 Based on a lugubrious novel by Ludwig Wolff, The Mysterious Lady is a romance/espionage tailored to the talents of Greta Garbo. The divine Miss G plays an alluring Russian spy, directly answerable to satanic-featured general Gustav von Seyffertitz. While she's accustomed to fomenting suicides and apoplexy amongst her male victims, Garbo cannot help but become romantically involved with Austrian-officer Conrad Nagel. Forced to choose between her love of Russia and her love for Nagel, Garbo decides upon the latter--meaning that there's a bullet in the future for vonSeyfertitz. For all its MGM gloss, Mysterious Lady would be just so much borscht without the ethereal presence of its female star.

Richard Alexander
as Aide to the General

Critic Reviews for The Mysterious Lady

Using up 83 minutes to unload this yarn is ridiculous.

I recommend The Mysterious Lady highly, even to those who don't feel about Greta Garbo quite as I do.

Garbo acquits herself well as the tortured lover.

A fascinating, beautifully crafted film that never quite seems to know what it wants to be, but waffles about with such grace and style that you finally don't care.

Audience Reviews for The Mysterious Lady

Standard Garbo melodrama is overblown but entertaining if you're a fan. Greta is breathtaking, amazingly contemporary in appearance for a film that is almost 90 years old.

This movie seemed like the average romance plot where they're in love and they're spies during wartime so it's tragic. But it's not totally like that, it gets much better. They're high ranked and trusted by their respective countries, and there's another guy who loves Garbo's character. It's a very exciting romance movie, and I enjoyed it.