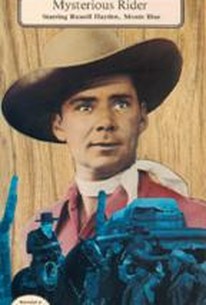 The oft-filmed Zane Grey story The Mysterious Rider was given another go-round by Paramount Pictures in 1938. Produced by Harry Sherman of "Hopalong Cassidy" fame, the film bestows top billing upon stalwart supporting actor Douglass Dumbrille. Usually cast as a villain, Dumbrille is here seen in a sympathetic role as "good bad man" Pecos Bill, who turned to a life of crime after being falsely accused of murder. In the company of his comic sidekick Frosty (Sidney Toler), Pecos chances arrest by returning to his home town to visit his grown daughter Collie (Charlotte Field). He discovers that Collie is about to enter into a loveless marriage Jack (Weldon Heyburn), the shiftless son of Pecos' former foreman Bellounds (Stanley Andrews), who seems to be in cahoots with an cattle-rustling gang headed by Folsom (Monte Blue). In rapid succession, Pecos ends Folsom's criminal activities, clears the name of his old friend Bellounds, and plays matchmaker for Collie and the boy she really cares about, young Wils (Russell Hayden). To long and expensive to qualify as a mere B picture, Mysterious Rider is one of the best of Paramount's late-1930s "Zane Grey" series.

There are no critic reviews yet for Mysterious Rider. Keep checking Rotten Tomatoes for updates!

An errant father returns to make life good for his grownup daughter in this lively Westerner starring Douglass Dumbrille (who usually plays bad guys) and Sydney Toler (who usually plays Charlie Chan) as a buddy team of cut-ups who work behind the scenes to do, you know, acts of goodness. Loads of horse-ridin', gun shootin', fist-fightin', rootin', tootin', goodness it is, too.