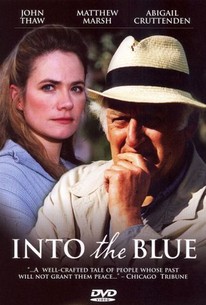 More than one case of mistaken identity is leading an expatriate Briton into hot water in Greece in this tale of suspense. Harry Barnett (John Thaw) was once a successful British businessman, but after his luck and his business acumen went south, Harry suddenly found himself single, and these days he works as a laborer for his old friend Alan Dysart (Matthew Marsh), a former government figure who fled to the Greek island of Rhodes to get away from a scandal. One night, Harry enjoys a brief fling with Heather Mallender, an attractive woman from out of town; the next morning, Harry discovers that Heather is nowhere to be found, and has seemingly disappeared. When Dysart's men seem downright casual about Heather's death, it draws Harry's suspicion; he begins digging, and learns Heather's death parroted the killing of one of Dysart's former employees -- who was also Heather's sister. 1997's Into the Blue was originally produced for British television, and first aired in the United States as part of the anthology series Masterpiece Theatre.

Miles Anderson
as Kingdom
View All

There are no critic reviews yet for Mystery!. Keep checking Rotten Tomatoes for updates!

There are no featured audience reviews yet. Click the link below to see what others say about Mystery!!