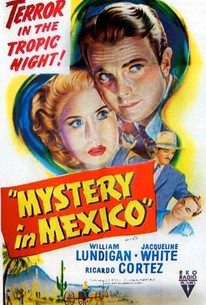 Much of Mystery in Mexico was filmed on location through the facilities of RKO Radio's Churubusco Studios. William Lundigan plays Steve an insurance investigator sent to Mexico City to ascertain the whereabouts of a missing colleague. Also concerned for the missing man's welfare is his sister, nightclub singer Victoria (Jacqueline White). A murder and a kidnapping follow in short order, with all the clues leading to a gang of elusive jewel thieves. There are plenty of Latino surnames in the cast list of Mystery in Mexico, including third-billed Ricardo Cortez (who came into the world as Jake Krantz).

Thalia Draper
as Floracita
View All

Critic Reviews for Mystery in Mexico

It's routine, but is one of those mystery films you never mind seeing if you want to pleasantly kill some time with something that's not that taxing on the 'old noggin.'

There are no featured reviews for Mystery in Mexico at this time.