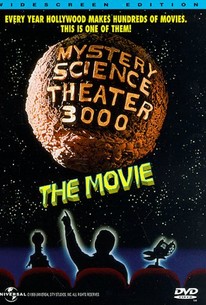 Critics Consensus: Mystery Science Theater 3000: The Movie may be thin and uneven, but it's hilarious in enough of the right spots to do the show's big-screen transition justice.

Critics Consensus: Mystery Science Theater 3000: The Movie may be thin and uneven, but it's hilarious in enough of the right spots to do the show's big-screen transition justice.

Critic Consensus: Mystery Science Theater 3000: The Movie may be thin and uneven, but it's hilarious in enough of the right spots to do the show's big-screen transition justice.

In this film, based on the television series, Evil Dr. Forreseter plans to take over the Earth by subjecting people to an endless barrage of bad 1950s sci-fi films. Test subjects Mike Nelson and his robots are not easily brainwashed and fight back by making wiseacre remarks throughout the film.

For many, a little of this joking will go a long way; devoted fans, however, will wish for a double-bill. Count me closer to the latter group.

There are still enough bad makeup jobs, pretentious lines, and coy sexual situations to give the chattering puppets plenty of fodder.

If you're in the mood for some knuckleheaded comedy at the expense of -- in mad scientist Dr. Forrester's words -- "a stinky cinematic suppository called This Island Earth," then get thee to some place playing MST3K.

It's a fun enough way to pass the time. And fans of the TV version of MST3K certainly won't be disappointed. But it would be just as much -- if not more -- fun watching it in your own living room with a bunch of rowdy pals.

[MSTies] can rest assured that the movie is about as funny as a typical episode of the show that is, pretty darn funny in a sly and satirical sort of way. For others, the movie can serve as a good introduction to the whole MST3K phenomenon.

As the gags pile up remorselessly, and the viewer strains to keep up with the story line and the cutting subtext, a furious but benign apnea takes hold. You can't enjoy a good long laugh because you'll miss too much.

Perfectly fine but not much more than that

Few films empathize quite so passionately with their audience.

Mystery Science Theater 3000: The Movie is about a third as funny as it thinks it is. Still, that's pretty funny and about twice as funny as most American comedies these days.

The show provides a prodigious number of giggles, and it's so short (well under 90 minutes) that you'll have plenty of time to rent the original This Island Earth and test out wisecracks of your own.

The film is a vindication of bad taste, and of the principle that mocking well is the best revenge.

From the cult TV series, a man and his two robots trapped in space mock one of the worst movies ever made--only in the one-off feature version the film is THIS ISLAND EARTH, a colorful sci-fi film that isn't close to the laughable fare the show usually covered. The feature film offers very few extras for fans, won't covert anyone new to the cause, and would have been considered an average to below average episode if it had aired on TV.

I love Mystery Science Theater, but the movie version does not compare well with the television series. This Island Earth just doesn't offer many opportunities for humor (except for the absurd insect mutants that are supposedly similar to the insects here on earth). I can't imagine even the most hardcore MST3K fans enjoying this very much.

My first exposure to the MST franchise, I had to watch it a second time around to get it better (first time was at night on tv when I was half-asleep) and I'm glad I decided to give it a second chance when I taped it. I had myself in stitches while watching this, I really did. Taking a below average film and subjecting it to ridicule was, at that point, the most original thing I had ever seen or heard and these guys made it seem so easy. Naturally, after watching episodes of the show, I see things in the movie that could have been improved (like adding the theme song, which is now my favorite theme song to any show ever made) but considering what they had to work with and what came out, I'd say it's a great result regardless. Despite what some call "dumbed down" commentary, there are still good laughs to be had by all. Recurring jokes such as "The Amazing Rando" and frequent outbursts of "I'm not an alien!" are always amusing. And the host segments are great, as they all relate to their plight of being stuck in space. If science ever gets around to building robots that aren't glorified slaves, Crow and Servo should be on the top of their to-build lists. I know I want a pair of wisecracking robot buddies like those two

If you, the viewer, are not familiar with Mystery Science Theater 3000, better known as MST3K, I recommend that you rent/buy/borrow, beg, or steal tapes and dvds to become a tad familiar with the concept. The concept is: riffing a B-or-worse-scifi-movie; the victim, er-- subject, in this case, is "This Island Earth", a classic from the 50's. There's this guy (Mike) who's been shot up to an orbiting space station (the Satellite of Love, or SOL) by a Mad Scientist (Dr. Clayton Forrester). Mike is a replacement test subject (Joel, who made the robots for companionship, escaped), and he and Joel's 'bots (short for ro-bots) ease the stress of being test subjects by making wise@$$ remarks while the movie is running. Then there are little interval segments that attempt to tell a coherent narrative. The catch is that the bots are actually only puppets made from a gumball machine head, salad bowl, Tupperware interlocking set of flower vases, and armatures from folding adjustable desk lamps. The original actor who voices Crow T. Robot is Trace Beaulieu, who also plays Dr. Forrester . The guy who voices Tom Servo is Kevin Murphy-- well, if you really want to see him, you'll have to find the episodes on tape and go looking for his appearances as other characters. This movie is just as good as the episodes that have appeared either on Comedy Central or the Sci-Fi Channel, but this time Best Brains, the production company, had more money to make better sets, props, and better staging of gags. The Hubble was great, as was the amusing and embarrassing segment where Dr. Forrester ends up in the Metalunan guy's shower. [aaagghhh!!!] MST3K: The Movie was what I hoped at the time to be the first in a long line of franchise movies. Too bad that didn't happen but we still have this movie and the episodes of the series to enjoy