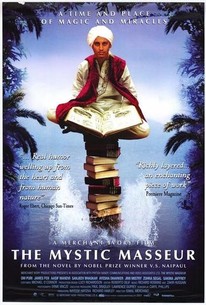 Critics Consensus: Though pretty to look at, The Mystic Masseur is too slow-paced and lacks narrative tension.

Critics Consensus: Though pretty to look at, The Mystic Masseur is too slow-paced and lacks narrative tension.

Critic Consensus: Though pretty to look at, The Mystic Masseur is too slow-paced and lacks narrative tension.

Ismail Merchant, best known as the producing half of the successful Merchant-Ivory team, once again steps behind the camera as director for this story of life among Indian expatriates in the 1950s. Ganesh (Aasif Mandvi) is a young man who was born to a community of Indian exiles living in Trinidad. Always bright, Ganesh hopes to make a career for himself as a writer, but he lacks the money to pursue writing full-time, and his ideas about education clash with those of his employers after he gets a job as a teacher, leaving him with few prospects. Returning to Trinidad after the death of his father, Ganesh is pressured into marrying a local woman named Leela (Ayesha Dharker), whose father, Ramlogan (Om Puri), is a successful merchant. Ganesh and Leela move to a modest home in the hills, where he begins work on a book, but Leela chafes at the Spartan lifestyle dictated by Ganesh's finances, and for a time leaves their home to stay with her parents. In time, Ganesh completes his first book -- a book for lay people on the Hindu faith -- but sales are sluggish until Ganesh and Leela come up with a plan to boost interest in Ganesh's work. Ganesh is promoted as a "Mystic Masseur" with special powers to heal the infirm; Ganesh's routine quickly makes his work very popular with spiritual seekers, and his book becomes a top-seller. However, Ganesh becomes disillusioned with his newfound fame and power, especially after he attempts to take advantage of his celebrity by entering the political arena. The Mystic Masseur was based on a novel by V.S. Naipaul, who won an Nobel prize in the year of this film's release.

Rez Kempton
as Basdeo
View All

Critic Reviews for The Mystic Masseur

Maybe Mr. Merchant should just re-watch a few of the films he's so superbly produced. One thing James Ivory has never been afraid to be is vicious.

A real clunker. A well-made, thoughtful, well-acted clunker, but a clunker nonetheless.

A warm-hearted gem of a film.

Although some of its plotting feels forced ... The Mystic Masseur coasts along nicely on Merchant's sharply honed craftsmanship, which grants the stunning Trinidad locations an extra degree of lushness.

Though Ganesh is successful in a midlevel sort of way, there's nothing so striking or fascinating or metaphorically significant about his career as to rate two hours of our attention.

What could have become just another cautionary fable is allowed to play out as a clever, charming tale %u2013 as pleasantly in its own way as its self-dramatizing characters.

A lyrical metaphor for cultural and personal self-discovery and a picaresque view of a little-remembered world.

Much of the humor is at the expense of these transplanted Indians, and would be considered exploitative had it not been made by people whom it's mocking.

The faithful will enjoy this sometimes wry adaptation of V.S. Naipaul's novel, but newcomers may find themselves stifling a yawn or two during the first hour.

Audience Reviews for The Mystic Masseur

There are no featured audience reviews yet. Click the link below to see what others say about The Mystic Masseur!