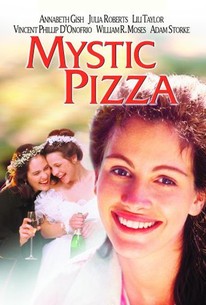 Critics Consensus: Mystic Pizza is like its namesake food: it's cheesy, topped with romance, and rises to the occasion.

Critics Consensus: Mystic Pizza is like its namesake food: it's cheesy, topped with romance, and rises to the occasion.

Critic Consensus: Mystic Pizza is like its namesake food: it's cheesy, topped with romance, and rises to the occasion.

Three teenagers learn a lot about life and love one summer in this romantic comedy-drama. Kat (Annabeth Gish), Daisy (Julia Roberts), and Jojo (Lili Taylor) are three working-class women just out of high school who have jobs at the same pizza parlor in the resort community of Mystic, Connecticut. Kat wants to study astronomy at Yale; when she starts baby-sitting for Tim (William R. Moses), a wealthy Yale graduate summering in Mystic, she finds herself falling in love with him, even though he's married and nearly twice her age. Daisy, who isn't sure what she wants from life, starts going with Charlie (Adam Storke), a recent law school dropout, though she starts to think that it may be more to rebel against her family than out of genuine affection. And Jojo is attracted to Bill (Vincent D'Onofrio), but she doesn't want to get married (she's already left him at the altar once); when Bill announces that he's no longer willing to have sex without marriage, she has to decide if his affections are worth a lifetime commitment. Conchata Ferrell appears in a supporting role as Leona, the proprietor of the pizza parlor, who zealously guards the secret formula of her sauce.

Louis Turenne
as Hector "The Fireside

Don't be put off by the ambiguous-sounding title and the lack of star names. Mystic Pizza is a marvelously warm and funny comedy-drama that is frankly sentimental but never cloying.

Thanks to sensitive direction by Petrie, the result is a thoroughly involving movie that doesn't resort to violence, sex or schmaltz to pack an emotional punch.

Though in essence this is little more than a girls' romance novel brought to life, it has been filled with heart and humor.

You get the general sense that the actors -- particularly Annabeth Gish and, though he is hardly featured, D'Onofrio (who was last seen as the troubled recruit in "Full Metal Jacket") -- are better than their material, but this is scant compensation.

"Mystic Pizza" does create the feeling of a small resort town and the people who live there and, amazingly, given the familiar nature of a lot of the material, it nearly always keeps us interested.

It's clear immediately that Mystic Pizza benefits substantially from the efforts of its talented roster of performers...

Though the film's heart is in the right place, somehow it all winds up about as flat as one of the celebrated pies at Mystic Pizza. [Blu-ray]

To put it bluntly, Mystic Pizza is more or less a movie version of a soap opera, layered in with some quirky humor and gigantic '80s hair.

The only novelty of this familiar small-town coming-of-age saga is that its women are Portugueste-American, but it's laced with humor and well-acted, and the gorgeous-looking Julia Roberts shows strong potential for becoming a major star.

The story of one summer in the life of ... three lifelong friends ... is sweet and poignant, a thoughtful look at the perils and joys of falling in love.

Coming-of-age story flirts with melodrama but is saved by wonderful performances.

One summer in the lives of three young women who work as waitresses at Mystic Pizza - the local small-town pizza place. This movie delves into class distinction and work ethic and getting out of Mystic.

Three women deal with relationships in small town Connecticut. The performances by the three female leads are all quite strong, but they're strong in a cliched American way; American cinema often asks its leading ladies to be charming, upbeat, and beautiful, without much depth or sincerity, and the leads of Mystic Pizza follow this tradition, smiling and laughing in a light-hearted, cheeky way throughout the soap operatic plot. The one highlight is Lili Taylor's performance, whose monologue after she "breaks up" with Bill is extraordinary in its writing and performance. Overall, I don't have much to say about Mystic Pizza because Mystic Pizza doesn't have a lot to say; rather than a coming-of-age drama in which boys become men, Hollywood restricts female coming-of-age dramas to films in which girls become Barbies.

Between this and Now and Then I think have a teen girl drama fetish. I really feel for these sorts of situations, I don't know.