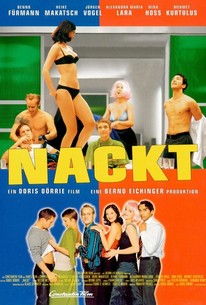 Three couples with varying degrees of success in both financial and romantic matters find they know relatively little about themselves or their respective partners in director Doris Dorrie's 2002 film Naked. Successful stockbroker Dylan (Mehmet Kurtulus) and his gorgeous wife, Charlotte (Nina Hoss), host a dinner party at their lavish apartment for two other pairs of friends, the recently separated Felix (Benno Furmann) and Emilia (Heike Makatsch) and the seemingly happy Boris (Juergen Vogel) and Annette (Alexandra Maria Lara). Felix and Emilia had decided to attend the dinner as a couple, though each still has unresolved feelings towards the other. Meanwhile, Annette and Boris are on the verge of becoming engaged, though something seems to be preventing this from happening. As the night goes on, several topics are discussed -- ranging from happy memories from the past to sexual relationships. At the height of the sex conversation, an impromptu bet is made that the two intact couples would not be able to identify their respective lovers by touching their naked bodies while blindfolded. Taking the bet, Boris, Annette, Dylan, and Charlotte strip down and discover more about themselves and each other than they ever intended. Based on the play Happy also written by Dorrie, Naked was selected as a competing film at the 2002 Venice Film Festival. ~ Ryan Shriver, Rovi

It's hard to say if that's the filmmaker's intention, but the film's honesty is its saving grace.

I saw Naked a week ago and I'm still thinking about its design...

There are no featured reviews for Naked (Nackt) at this time.