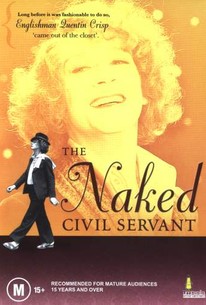 Based on Quentin Crisp's autobiography, the once-controversial picture The Naked Civil Servant stars John Hurt as Crisp, a flamboyant character who publicly declared his homosexuality during the brutally homophobic and misogynistic England of the 1930s and '40s -- a time when this alternative lifestyle was still an offense punishable by imprisonment in Great Britain. (The man dyed his hair and wore makeup in an era when women were looked on with disapproval for such behavior!) Director Jack Gold handles the material with taste, discretion, and a generous supply of humor; it thus might seem bizarre to a contemporary viewer that anyone could be offended by this, but remember that the world was a different place in 1975. More than a few PBS subscribers threatened to yank their support when this British TV film was first offered to American viewers in the spring of that year. Fortunately, many others were willing to see beyond the film's controversial subject matter and revel in the excellence of the production and its participants; one of the film's biggest and most influential fans was none other than Milton Berle. Carl Davis, best known for his symphonic silent-movie restoration scores, composed the music. Hurt drew equal controversy later that same year for his work in another British drama-turned-PBS special -- when he played the psychotic Caligula in Herbert Wise's epic miniseries I, Claudius. ~ Hal Erickson, Rovi

Frederick Treves
as Detective
View All

Thanks to Hurt's extraordinary performance -- soft-skinned, red-lipped and determined to fight politely for his rights -- it still seems relevant and not just an exercise in nostalgia.

It is well that Hurt's performance is preserved on film, for it is an extraordinary achievement.

The Naked Civil Servant is camp and unabashedly so - but it has far more going on beneath the surface, and helped usher in more nuanced portrayals of LGBT people and culture in the years to come.

Somewhat funny and somewhat sad at the same time. It's a exaggerated portrayal of the LGBT subculture of the 30s in Britain, based on the autobiography of Quentin Crisp. It's not entirely positive on the views of homosexuality as the characters were all stereotypically feminine. John hurt did a great job, but it's just not a film I would regard highly.

At a time when homosexuality was about as popular as bing a nazi Mr Crisp went about his life as camply as possible. In the face of overwhelming odds he kept it camp. Hurt is brillaint as the over the top chutney. It does have a serious side and the message is clear.

Along with his portrayal of Joseph Merrick, this is John Hurt's greatest performance. Personally I don't think he's ever been better. I think if you stood them side by side you would have found it difficult to say who was the real Quentin Crisp. Crisp was the quintessential English eccentric - shunned by general society for his determination to be himself and shunned by the gay society of the time for being 'too homo'! He was way ahead of his time - pre-empting the likes of Boy George and David Bowie by decades. If someone made him up they wouldn't believe it! I remember seeing him on Wogan chat show years ago. When this fragile looking, aged queen with a blue rinse, came on and sat down he was greeted with sniggers and nervous giggles in the audience. But he was unfazed - after all he has had this all his life. But he soon had them captivated with his intelligence and wit and left the studio to a respectable applause. He is still a controversial figure with parts of the gay community - often publicly proclaiming himself a "self loathing homosexual" was not gonna win him many fans. But his bravery and determination to be true to himself against such outrageous hostility and ignorence should be applauded. I'm not sure why this is in the films list seeing as it was a British TV drama from the 70s but what the Hell! It's still a great story with an eye-popping central performance.