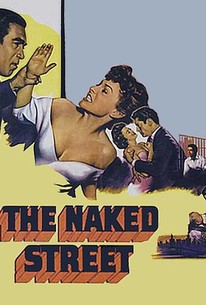 A ruthless crime lord saves his sister from social embarrassment by working diligently to get the gangster who fathered her unborn baby off death row and out of prison so he can do the decent thing and marry the girl. The freed gangster is not thrilled with his new bride, but stays loyal until the woman miscarries. He then returns to crime and begins messing with other women, something that outrages his wife's nefarious brother and leads him to frame the cocky youth and get him sent back to prison and certain death. Just before he is to die, the youth tells his story to a sympathetic reporter, who decides to go after the real troublemaker.

Else Neft
as Mrs. Regalzyk

Sammie Weiss
as Lennie
View All

Critic Reviews for The Naked Street (The Brass Ring)

Audience Reviews for The Naked Street (The Brass Ring)

Passable noirish crime drama with Graves the crusading reporter and many familiar character actors popping up here and there. Quinn is properly oily but Farley Granger is miscast looking more like he's fresh from prep school than the tenements. Anne Bancroft, during the first uneventful phase of her Hollywoood career, is wasted as Quinn's timourous sister all her fire banked into a nothing part. The script and direction are competent nothing more.