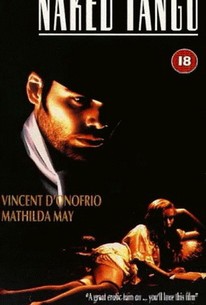 A woman desperate to change her life takes a wrong turn into danger and degradation in this drama. In 1924, Stephanie (Mathilda May) is travelling to Buenos Aires with her husband, who is considerably older than her and in poor health. Stephanie is not happy with her life, so when a young woman named Alba falls overboard and drowns, Stephanie assumes her identity once the ship arrives in Argentina. Stephanie realizes that this was a terrible mistake when she learns that Alba was the mail-order bride of Zico (Esai Morales), a notorious pimp and mobster who puts her to work in a brothel that he operates with his family. A terrified Stephanie kills her first customer and is soon on the run from the police; she finds that she must return to Zico's criminal family for protection, where she is placed at the mercy of Cholo (Vincent D'Onofrio), the sensuous-but-brutal "King of the Tango." Naked Tango reunited Leonard Schrader, Manuel Puig, and David Weisman, who had worked together as screenwriter, book author, and producer on the international hit Kiss of the Spider Woman (1985).

There are no critic reviews yet for Naked Tango. Keep checking Rotten Tomatoes for updates!

There are no featured audience reviews yet. Click the link below to see what others say about Naked Tango!