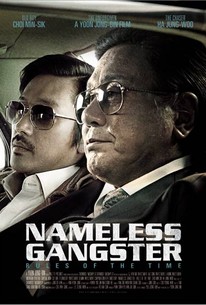 On the verge of being laid off, corrupt customs officer Choi Ik-hyun finds a methamphetamine shipment. His life turns around when he partners with the harbor city's biggest crime organization boss, Choi Hyung-bae to make money off it. They eventually find out they are distant relatives. Hyung-bae helps Ik-hyun set up a business with the money from drug trafficking while Ik-hyun lobbies for his partner Hyung-bae. With his unique wit and ability to make people like him, Ik-hyun borrows Hyung-bae's power to take over Busan. However, the partnership turns sour over delings with a rival organization. Soon after, the government declares war on crime and Ik-hyeon decides to take the opportunity to set up his partner and escape the tightening grip of the law enforcement. -- (C) CJ Entertainment

I approve of Nameless Gangster as an epic of Korean gangsters that stands out, solidly, with the performances of Choi Min-sik and Ha Jung-woo. [Full review in Spanish]

Yoon Jong-bin presents a highly realistic and entertaining depiction of the crime world of the 80s and 90s, and creates a truly masterful crime thriller with constant plots, intrigues, betrayals, and violence.

Yoon Jong-bin's film has the epic sweep and detail of a gangster movie like "Scarface," but none of the mythologizing.

A well-acted, intelligent and riveting thrill ride that will take your breath away. It's one of the most powerful gangster films in years.

Nameless Gangster does what a number of recent Korean films manage to do so well, mix genre elements with serious social and political realities. This mix makes the films richer in their themes and emotional impact.

Jong-bin Yun's Nameless Gangster stretches as far as it can go without much to back it up.

The plot is too long for its own good; easily past 2 hours and there isn't much to show for it. The pacing isn't exactly at a snail's pace, which is a good thing, but as events come and go it all leads to a climax that never ends up as a memorable highlight. It's almost as if this film goes through the motions then closes its doors light and easy.

For a gangster story it contains its share of violence, mostly in the form of brawls and one-sided beatings. There isn't a whole lot of blood or extreme incidents to get queasy over either.

Min-sik Choi puts on an amusing performance from time to time. His voice really makes him stand out among the rest. His character, on the other hand, doesn't contain much to like. Actually, none of the characters can be considered heroes and this ends up as another disappointing aspect of the film.

As a gangster flick, Nameless Gangster is watchable; not really one to make time for though.

While the movie seems to depend on too many coincidences the exploration of loyalty and greed is effective, along with the performances from both Choi Min Sik and Ha Jung Woo. Watch it before it gets a....yeah, you know what i'm talking about.

Great character movie with Min-sik Choi giving a terrific performance! If you're a gangster film fan, this is mandatory viewing.