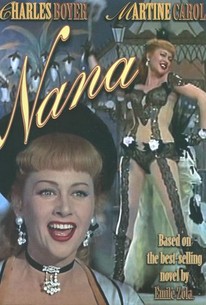 The most frequently filmed of Emile Zola's works, Nana was given a slick, polished cinemazation by French- filmmaker Christian-Jacque in 1955. Martine Carol is well (if predictably) cast in the title role, playing a poverty-stricken Parisian girl who rises to prominence as a high-priced whore. Nana is content to love 'em and leave 'em until she becomes the mistress of government-official Charles Boyer. Her genuine love for Boyer results in disgrace and disaster for them both. While less inhibited than the bowdlerized 1934 Sam Goldwyn production of Nana, this French/Italian co-production is rather far afield from the Zola original. ~ Hal Erickson, Rovi

There are no critic reviews yet for Nana. Keep checking Rotten Tomatoes for updates!

There are no featured reviews for Nana at this time.