Nancy Drew and the Hidden Staircase (1939) 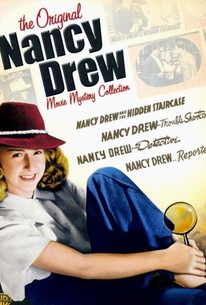 This final entry in Warner Bros.' Nancy Drew series is the only one actually based on a novel by Nancy Drew creator Carolyn Keene. Bonita Granville returns as the ebullient titular teenaged sleuth, while Frankie Thomas portrays Nancy's best friend and fellow "gumshoe" Ted Nickerson. The plot concerns a bizarre codicil in a will, requiring two elderly sisters to spend every night in their family mansion over a period of 20 years in order to lay claim to the crumbling old house. The ladies plan to contribute their legacy to a local children's hospital, but certain sinister forces in town hope to erect a racetrack where the mansion presently stands. When the sisters' chauffeur is murdered, Nancy and Ted investigate, even though Nancy's attorney father, Carson Drew (John Litel), has expressly forbidden them to do so. Their tremulous journey through the cellar of the mansion leads to a surprising revelation -- and, very nearly, to a watery grave. Arguably the best of the series, Nancy Drew and the Hidden Staircase moves along at so fast a clip that the audience is left nearly as breathless as the heroine.

William Hopper
as Reporter
View All

Critic Reviews for Nancy Drew and the Hidden Staircase

The Nancy Drew series comes to an anti-climactic close with this utterly ineffectual entry...

Audience Reviews for Nancy Drew and the Hidden Staircase

There are no featured audience reviews yet. Click the link below to see what others say about Nancy Drew and the Hidden Staircase!