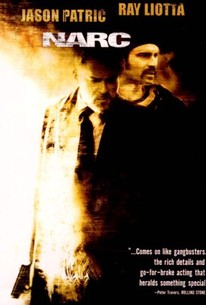 Critics Consensus: Jason Patric and Ray Liotta are electrifying in this gritty, if a little too familiar, cop drama.

Critics Consensus: Jason Patric and Ray Liotta are electrifying in this gritty, if a little too familiar, cop drama.

Critic Consensus: Jason Patric and Ray Liotta are electrifying in this gritty, if a little too familiar, cop drama.

Nick Tellis is a recovering drug addict. But staying clean is not so easy for this Detroit narcotics officer when the police department reinstates him in order to investigate an elusive 'narc' squad homicide. After a rookie cop is mysteriously killed in the line of duty, the police department teams Tellis up with the dead cop's partner--the volatile Lieutenant Henry Oak--to solve the murder. Soon the two of them find themselves crawling through the mean streets of Detroit. Their probative investigation leads them through filthy drug dens, crack houses, and alleyways to track the killer, but these all too familiar surroundings plague Tellis like a nightmare. As Tellis gets closer to revealing the truth behind the murder, he finds himself in jeopardy of losing his family, his dignity, and his life.

Thomas Patrice
as Off. Marcotte

As a director Carnahan definitely has the goods... Unfortunately the script is your basic renegade-cop narrative, with the usual hoo-ha about justice versus the law.

Joe Carnahan's Narc is familiar stuff, but it is bracingly effective. There hasn't been a cop and robbers film this cold and harsh since the 1970's.

The director is helped in no small part by his leading men.

A chokehold of a movie, grabbing us but not ultimately engaging us.

The stylish conviction of Carnahan and his never-better leads make this familiar yarn worth caring about.

For a picture that's billed as fresh and bracing, this is a pretty formulaic scheme, which Carnahan attempts to jolt into life through jittery direction.

Brilliant film about an undercover narcotics officer in Detroit who is brought back into a murder case of a fellow policeman after he is suspended from the force due to a drug bust gone awry. Jason Patric and Ray Liotta star in this mesmerizing film that has quite a twist and mood to it created by the dim cinematography, apt score and of course, the bleak subject matter that allows for real suspense and tension between the good, bad, and the ugly. This is one of those films that kind of got swept under the carpet, but is definitely a fine film worth checking out. Jason Patric is an underrated actor who turns in yet another good piece of character work and probably his best since "Rush" and "After Dark My Sweet". I'd say that this film is kind of Jason Patric's "Serpico".

A detective discharged after the accidental shooting of a pregnant bystander is partnered with a veteran detective with a reputation for excessive force to track down the killers who murdered an undercover cop. In the highly overpopulated genre of the cop thriller, Narc is neither the most original or most action packed, but what it does brilliantly is in the details. Carnahan is obviously influenced by the gritty cop dramas of the 1970s, particularly the likes of Serpico and The French Connection and the result is a very hardcore and believable character study of the men trapped in the grimy world they are trying to bring to justice. It features dialogue that's not exactly high art, but always rings true (even in the unsentimental domestic drama involving Patric and his wife) which combined with the excellent central performances make you actually feel submerged in his twilight world. Carnahan is perhaps occasionally a little too filter happy and gimmicky in his direction and the ending feels a little too neat considering the grittiness of the rest of the story, but if you like modern cop dramas such as The Wire and The Shield, you'll love this.

One of the best hard-nosed cop dramas of recent memory. I know it's not exactly original but I was riveted the entire time I was watching it. Jason Patric and Ray Liotta turn in some amazing performances. It's also great to see Chi McBride given a serious role for a change. Joe Carnahan is one of my top directors to watch out for. The guy definitely has the chops to full off a good solid flick, and this is one of them. It has a lot of substance and style and keeps you interested at every turn. So what if it reminds me of Homicide: Life on the Street? I don't care. This is a damn good movie!

A riveting, pulse-pounding story concerning a disturbed cop (Jason Patric) needing a rebound case to find his way back in to the good graces of the force after an ugly accident leaves him emotionally scarred. When he is offered the opportunity to partner up with a dirty, mean lieutenant (Ray Liotta) who is stalking the killer of his partner, he event...ually accepts. One of the best, most under-appreciated drug thrillers constructed in the last ten-fifteen years or so, this story excels mostly due to its direction. Joe Carnahan's desaturated color choice fits the mood of the city of Detroit so well, as he competently captures the depression and darkness associated within a crime-ridden region. Ray Liotta's explosive performance is something straight out of Hell. He never for a second feels like he's forcing it, as his monstrous and all too real feeling character won't leave your memory quickly. Jason Patric's tortured, yet very human performance as well proves to be very crucial to the success of this story. The ending delivers some nasty twists and turns I did not see coming. Without question a great thriller, whose only notable flaw is leaving the audience hanging at its conclusion.