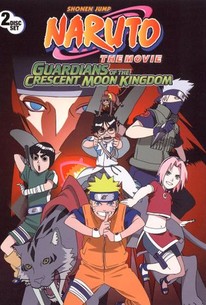 Naruto, Sakura and Kakashi team up with Rock Lee to protect Prince Michiru and his son Hikaru on their return home to the Crescent Moon Kingdom. Easy enough, until the royal family becomes a royal pain!

There are no critic reviews yet for Naruto Movie: Guardians of the Crescent Moon Kingdom. Keep checking Rotten Tomatoes for updates!

The biggest most notable problem with this movie is how much it lacks any sense of originality in any category you can think of.

Good movie, but weaker than the first two movies. The main problem stems in the form of very weak fight scenes. The bad guys in this movie are very underdeveloped. There is a bit to much sentimental stuff going on to as they did some best friends forever pinkie thing way to many times, but still it had some good humor and the characters were their usual selves. For first part of the movie it is basically just Uzumaki Naruto and the prince's son getting to know each other and come to understand each other. The only real action comes in the form of a ship they are traveling on being hit by a storm. Then they arrive at their destination only to discover the king has been overthrown and mysterious shinobi are working with the councilman who took over. Well you have a clash and the prince gets captured and Uzumaki Naruto, Rock Lee, Sakura and Kakashi have to go to the rescue.