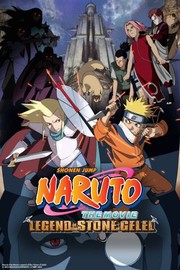 Jeremy B
April 17, 2018
While i still think that it is the worst Naruto movie by far, it still isn't a movie that I would call bad... It's simply okay.

Rorshach S
½ October 23, 2014
There's no denying its early adventurous feel, but Naruto 2 unfortunately settles for a trite build-up to its disappointing climax.

matt s
½ December 22, 2013
not a great film and not as good as the first movie but however has a far greater art style

Tiffany M
December 20, 2013
Legend of the stone of Gelel is good. The whole series of Naruto is basically about finding good friends and fighting for what you believe in. Trust me, Naruto is and always will be the first Manga I have ever read.. so ya anime fan on the standing point. If you really want to understand why they have "special powers then you might want to either watch the series for the first season or read the books online or the Wiki (wiki helps a lot) because this movie is about ninjas Naruto Uzamaki is the strong-headed arrogant hero of the plot.... he's the main character, he's had a hard life because there is a demon sealed inside of him (not going to spoil anymore) he is on a quest to make every one in his village to like him and to become stronger to bring back his friend Sasuke ( The one guy Naruto and Sakura both talk about through the whole movie) . The only female hero is Sakura Hurano, she has a quick temper and is practically useless about anything ninjutsu wise but her wits save her there. Gaara controls sand and he is just like Naruto but has a weaker demon . Shikamaru controls shadows and besides Kankuro he is the only chunin . Kankuro is the older brother of Gaara. I'm not going to say much about Temujin because then that will ruin the movie. Haido is the bad guy with three henchmen and their all equally weird. Please remember that their not that amazing with powers because their between the ages of 13-16... and the started learning powers more then cloning at about 12 1/2 , except Gaara Kankuro and Shikamaru their powers either take year of learning or their passed down through their clan.

Jerry L
½ September 21, 2013
not as good as the first film but descant at best but the plot was still good and i still enjoyed it

Pedro C
July 6, 2013
Great movie and it keeps the time line wit the series "Naruto". Unfortunately, people who has not seen or read the manga cartoon, will get loss.

March 26, 2013
this is another one of the movies i rfeally really want to see

Super Reviewer
Caesar M
½ March 6, 2013
A year ago I saw an animated movie based on a anime magna series name Naruto and much to my surprise I liked the film adaptation. Now I should go on record and say I'm not an anime fan, but if there is anything "Akira" has proven is if done right even the uninitiated can be drawn into it. This sequel however alienates those who are not familiar with the source material.

Naruto: Legend of the Stone of Gelel is about...I have no idea. I tired paying attention as much as I could but the plot kept loosing my interest. It had no real direction heavily being convoluted. The so called "twists" can be seen from a mile away. Things that appear to be important are poorly explained. Our main characters are annoying. Naruto is meant to be our hero, but he never stops shouting his lines. Then there is Sakura who for some reason is the only female ninja and does not have any special abilities. Seems odd that the guys can control sand, control people shadows, make clones, and one is a puppet master yet the only female character has no remarkable abilities. Hmm...could this movie undertone be saying that women are inferior? I wouldn't count it out since most of the villain henchman are women that are defeated easily by men. Well one evil henchman is defeated by Sakura, but only by being tricked into her death by sheer stupidity. While I'm on this subject the only female hero is a brat. That's her only character trait and is one dimensional without contributing anything major to the plot. Which also reminds me 95% percent of her dialogue has something to do with a guy. She also hardly acts on her behalf mostly taking orders from her male friends.

Back on topic after that unexpected detour. The film also does not explain to the regular movie viewer what happened before the events of the movie. Last time I remember there was a guy name Susake who accompanied Naruto on his journey. What happened to him? The only context the movie gives us is the two walked past each other in a empty field one time without any sort of social contact. Am I suppose to assume just because these two didn't talk to each other that one time that these two characters are no longer friends. I guess so since that's the closest that it comes to explaining Susake absent. While I'm still talking about fictional characters the new ones that are introduced are not developed. There is a guy who controls sand, but that all I know on him. There is a puppet master, but I know nothing on him nor how he controls his puppet without strings. Then there's Chicamaru who name I've most likely gotten wrong that I have no reason to care about. Who is he? How does he know Naruto? What's his back story? IT NEVER EXPLAINS!

Before I linger on this film too long the plot in general in not engaging in any way. We learn nothing on the characters of the story nor their motivations. There's little explaining on major plot points and even less time to flesh out any kind of back story. The ninja do have battle techniques know as "Plot Contrivances". These ninjas have master plot contrivances to the point where they all avoid death, over powered their enemies easily, and just so happen to be immune to any injury. The humor is too force making the characters more annoying than likable. The animation is a downgrade. I'm not suppose notice tiny details like a character hair color being less pink than in the last movie. I'm also not suppose to notice when the dubbing keeps talking when no mouth is moving. The characters movement is award and wonky. They look more like rag dolls than teenagers. The ninja battles are incredibly lame. It's the same thing over and over. Characters are either jumping around to much or one character stands in place while their opponent does an attack for them to counteract. They end too quickly. Last time I saw an Orca iced-whale attack nearly demolish a mountain, but nothing here is as cool. At least the voice acting is passable.

Naruto: Legend of the Stone of Gelel is not for non-fans of the series. The first Naruto film at least gives you enough information to care about the characters, know what's going on, and had animation to go with the action. This sequel does not work as a movie for it explains to little for non-fans, relies to heavily making stuff up along the way, and weak animation. This is strictly for the fans who might enjoy it, but for those are not fans this won't change your mind on the series.

Robert H
January 1, 2013
I thought I had seen all the original movies for the Naruto anime but when I found this one, it didn't seem familiar. The film has a story that is quite good. The message is one that makes sense, especially in the world today. The introduction of a substance that can essentially give people ninja powers is pretty cool and the fight sequences are quite a lot of fun thanks to a large amount of involvement with the Sand Village.
Possibly one of the better films from the original Naruto series.

Stazi W
December 6, 2012
Anything to do with Naruto is AMAZING!Naruto is just about the best thing ever!

November 24, 2012
i was excited to hear about a 2nd naruto movie. however this one i will admit was better than the 1st in action and i guess storyline too. however i felt that thestory did not focus on anything ninja except the shinobi way and action. other than that good film.

Jonathan P
½ October 31, 2012
I will preface this by saying I am not a fan of Anime so read my review with that in mind,. What was this about? I don't really know. I kept losing interest and would have to rewind to try and see what I missed. While the artwork is great the story is just so fantastical and unrealistic (even for Anime standards) that I feel asleep twice. From what I gathered Naruto is trying to stop a group who wants some sort of stone that will give them the power to build a Utopian society. Problem is the leader of the group is dishonest and wants the stone for his own selfish purposes. Again this might be inaccurate as it truly was boring enough to put me to sleep. However I did enjoy the voice acting of Junko Takeuchi who provided the voice of Naruto. The passion in which he delivered his lines is felt even if the movie was as bland as anything I have ever seen to this point.
Page 1 of 56