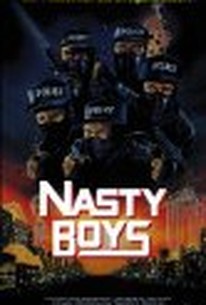 The Nasty Boys refers not to a rock group but an elite corps of law enforcement officers. This fact-based TV movie is set in August, 1986. The place is drug-ridden North Las Vegas, Nevada. Unable to stem the drug trade by orthodox means, the police department organizes a group of "commando cops", who swoop down on the narcotics kingpins while garbed in identification-obscuring ski masks. These guerilla tactics worked beautifully in 1986, though the hooded vigilantism inherent in so extreme a police procedure has subsequently triggered racial tensions in some large cities. In 1989, however, The Nasty Boys was regarded as a merely a slam-bang piece of entertainment. It was designed as the pilot for a potential TV series, and was given a "sure-fire" network lead-in with the premiere episode of Baywatch (Baywatch clicked; The Nasty Boys clunked).

It is cliche-ridden, violent and an affront to civil libertarians everywhere. But it is also so unpretentious that it succeeds in entertaining.

There are no featured reviews for Nasty Boys at this time.