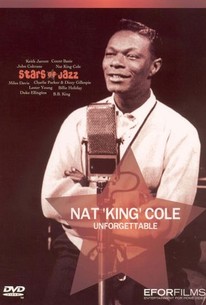 Nat King Cole is best remembered as the world-renowned crooner who captivated audiences with his airy songs. Unforgettable traces Cole's life through the words of those that knew him personally. The star-studded lineup includes Frank Sinatra, Ella Fitzgerald, and Mel Torme. Together with Cole's family, they paint a picture of a gentle genius whose smooth vocals made him famous. The documentary also features stage footage and home movies of Cole. Viewers are treated to tunes such as "Route 66," "These Foolish Things," "Tonight You Belong to Me," and "Hush Hush." Perhaps the most moving tribute is a final rendition of "Stardust" played during Cole's funeral. For lovers of traditional pop and Nat King Cole, Unforgettable leaves a lasting impression.

There are no critic reviews yet for Nat "King" Cole: Unforgettable. Keep checking Rotten Tomatoes for updates!

There are no featured reviews for Nat "King" Cole: Unforgettable at this time.