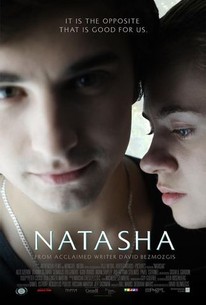 Acclaimed writer and filmmaker David Bezmozgis brings his best-selling book to the screen in Natasha. 16-year old Mark (Alex Ozerov) is the son of Russian-Jewish immigrants living in the suburbs north of Toronto. When his uncle enters into an arranged marriage with a woman from Moscow, the woman arrives in Canada with her 14-year old daughter, Natasha (Sasha K. Gordon). Mark, a slacker, is conscripted by his parents to take responsibility for the strange girl. He learns that, in Moscow, she'd led a troubled and promiscuous life. A secret and forbidden romance begins between the two of them that has bizarre and tragic consequences for everyone involved.

David Bezmogis adapts his own short story into an impressively controlled coming of age tale animated by a cunning central performance.

[Bezmozgis] manages to summon something richer out of this tale you might temporarily feel you've been told before.

A coming-of-age tale is infused with complicated emotional and sociological dynamics in award-winning writer David Bezmozgis' adaptation of his book Natasha and Other Stories.

Mr. Bezmozgis creates a disturbing portrait of a girl turned calculating and nihilistic by her upbringing, and there is no coyness here.

Written and directed by David Bezmozgis - adapting his 2004 short story - Natasha is as beguiling and confounding as its title character.

The movie succeeds because of its haunting lead performances.

Overstuffed and undercooked, but it's saved by the natural performances by Alex Ozerov and Sasha K. Gordon who add some emotional depth.

The screenplay is adept at capturing the confusion of the young.

This is in many ways a conventional coming-of-age story, but charismatic Gordon's mesmerizing performance as the mysterious Natasha makes it special.

The aspirations and heartbreak of the immigrant experience are captured with bittersweet precision in Natasha.

A deceptive and delicate coming-of-age piece - deceptive because it exposes a troubling underside, delicate because it does so with a measured and quiet intelligence.

There are no featured audience reviews yet. Click the link below to see what others say about Natasha!