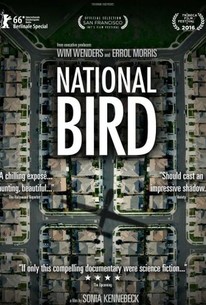 NATIONAL BIRD follows the dramatic journey of three whistleblowers who are determined to break the silence around one of the most controversial current affairs issues of our time: the secret U.S. drone war. At the center of the film are three U.S. military veterans. Plagued by guilt over participating in the killing of faceless people in foreign countries, they decide to speak out publicly, despite the possible consequences.Their stories take dramatic turns, leading one of the protagonists to Afghanistan where she learns about a horrendous incident. But her journey also gives hope for peace and redemption.

It is a thoughtful, sensitive and probing look at the ethics of drone warfare, carefully balancing its focus on those who press the buttons with the very real horrors faced by those on the receiving end, particularly innocent civilians.

The three subjects' personal stories don't really add up to a coherent critique of drone warfare, but their various experiences allow Kennebeck to attack the subject from multiple angles.

Kennebeck may be a newcomer to feature filmmaking, but her grasp of the material is accomplished.

National Bird shows that war will always be hell, even for those who aren't on the battleground.

[An] elegantly unsettling documentary about the United States' reliance on aerial combat drones.

The US drone assassination program epitomizes the criminality of the Barack Obama administration and the American military-intelligence machinery.

Director Sonia Kennebeck has made a masterpiece.

A chilling, disturbing look into the realities of America's secret drone war in the Middle East.

In punchy journalistic fashion and through elegant, combustible aerial imagery, Kennebeck captures a range of collateral damage in other countries and back home.

A profile of three whistleblowers who are very critical of America's secret drone program.

It is more interesting due to what it wants to say than how it does it, since it feels a bit repetitive after a while and relies mostly on talking heads to address a limiting subject in which there is too much that is confidential and not possible to be publicly disclosed.